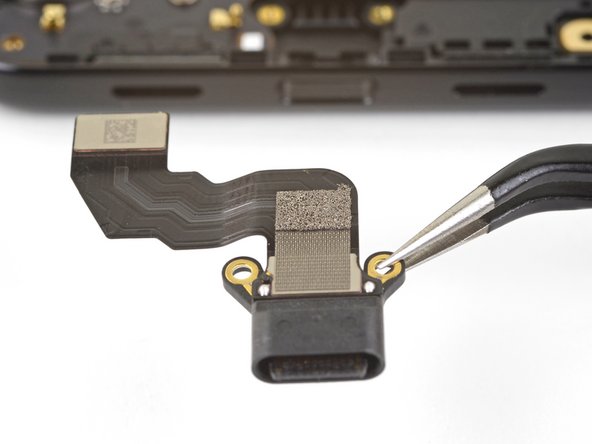 There was moister in the tip of my USB C cable when I plugged it into my phone to charge. A warning popped up on my screen to unplug. I did right away and the cord smoked…. My charging port is charged… the rest of the phone seems to work fine. The case did not feel hot afterward. Do you think my battery might be damaged too?

It sounds like moisture may have shorted some contacts at the USB port. That normally shouldn’t damage the battery. It’s possible the charging circuitry may be damaged.

Where is the part for this? I can't find the USB C port for the 3a!

Just did this. A few notes:

* There’s a lot, like a lot, of adhesive up by the front camera. Lacking an iOpener, I used a washcloth soaked in hot water and sealed in a plastic bag to soften the adhesive.

* My ifixit kit is old and didn’t have a pick, but I used the knife to shave down the corner of an old gift card so it was thinner, and that worked fine. I found it easiest to get the screen off by placing several old gift cards under the edges to keep them from sticking down as I pried at other areas.

* I got my replacement port from an eBay listing entitled “Charging Port Flex Cable for Google Pixel 3a G020A G020E G020B 5.6” and it works fine.

* I forgot to buy extra tape for sticking the screen back on, so to keep it from falling off while the tape is in the mail, I’ve applied clear cellophane tape around the outside edges of the screen and back where there are no ports or buttons. It works ok.

* I found that the T4 bit worked better than the T3 for all of the screws involved in this process.

Fantastic guide. Really helpful. Yes, tons of adhesive up front and on the bottom. Dealing with adhesive (clearing it out while opening the case, completely removing it while the case is open, and re-applying tesa tape before finishing) is by far the most time consuming part of this process. Overall, it took me 1.5 hrs from start to finish.