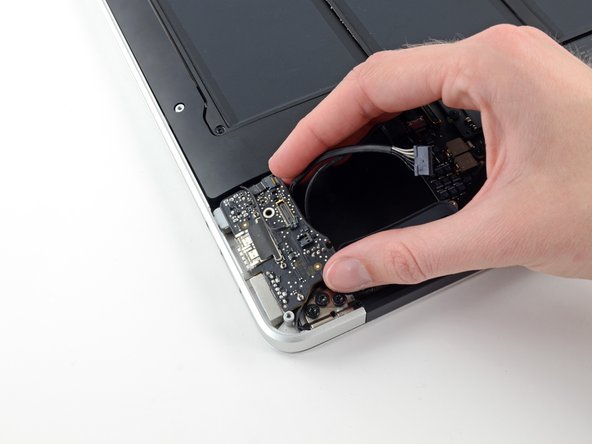 Use this guide to replace the I/O board, including the headphone jack, USB port, and MagSafe 2 port, in your MacBook Air 13" Early 2015.

Repair didn’t go as planned? Try some basic troubleshooting, or ask our Answers community for help.

Repair didn’t go as planned? Try some basic troubleshooting, or ask our Answers community for help.

I wish I could give more points because this saved a laptop! Killed another, but 1 is better than none.

I successfully fixed my Macbook Air early 2015. Power cord LED indicator was dark and the battery was not charging. This was because my power supply blew up while stuck within the couch and went dangerously hot. Power supply died as the IO Board too.

Replacing the IO Board fixed my Macbook.

Hi . I replaced my IO board because the power socket was burned. With the new board the Macbook air mid 2011 was running very slow. Changed back to the old one and computer was running as normal. Any Ideas why the new IO board was slowing the computer down. The USB port in the new board was also not working.

Thanks so much for putting this guide together; it worked a treat on a 2017 MacBook Air.

Thanks for this. I had a liquid spill and afterwards my IO Ribbon cable was getting extremely hot! Removed IO board, cleaned it with a sonicare toothbrush and electrical contact cleaner fluid, reassembled and now all is well

Mymagsafe light indicator was not lighting up so I replaced the IO board. Unfortunately it didn’t solve the issue. What could it be?

i have macbook air 2015 charger light not on

The new I/O road had a thin blue plastic adhesive film surrounding the MagSafe contacts. At first I thought it was for insulating it from the aluminum case but the old I/O board didn'‘t have an “insulator so I removed it. I hope that was correct. There was no mention of this in any of the instructions. Any advise?

Hi Roger! That sounds like protective wrapping and should be removed.

my macbook’s left I/O board and flex cable have been replaced after I spilled milk tea on it. However the battery won’t charge after the replacement and any new charger connected will charge it for a while and then stop

The spill may have damaged the battery too.