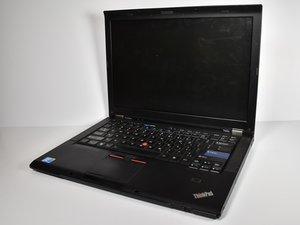 How can I fix my flickering screen problem?

I recently purchased this Thinkpad and my screen flickers about every 2 seconds when I’m not on full brightness. I’m uncertain whether its my LCD screen or the LED board that’s the problem.

This is a known problem among Thinkpad T400s users, and has been commonly linked to a faulty connection somewhere along the LCD cable (connections/cable itself):

If you notice the flickering resolving itself after flexing the screen (lightly) or that the problem only occurs in certain orientations then you are likely experiencing a wiring issue. If the screen only flickers at the start screen then it is possible that your drivers are out of date and you will want to update those before continuing.

If you are convinced it is a hardware issue then you can remove the LCD bezel (the plastic rim that surrounds the screen) and check the terminal connection at the display. If that doesn’t resolve the issue you will likely need to go further into the guts of your laptop and check the connections at the motherboard terminal and along the cable. If you notice that the cable has an issue then you will likely need to replace it. If that doesn’t resolve the issue then your LCD screen may be faulty and needs to be replaced.

can you provide link to a tutorial on how to disassemble a "lenovo G400s" and repair the issue and again re assemble it?

that will be very helpful

Same problem here. There are more possibilities for causing screen brightness variations. I have this contribution: when the battery is around 99% and the mains is connected then watch to the indicator in the lower-right screen edge. When the mains connector is shown for a few seconds (symbol beside battery indicator), on and off, AND the screen brightness is varying in that same rhythm then you have the same problem as I have in two different Lenovo laptops. Explanation: a fully charged battery is not charged further (that is good), but discharged by disconnecting the mains power supply (via software). That is not good for two reasons: life of the battery is reduced (Lenovo should keep the battery in rest) AND when powered by the battery, unwanted, the screen brightness is reduced (depending on your settings for brightness-on-battery). The variation is in the seconds-range. As long as Lenovo doesn't solve this malfunction there is only one solution: set brightness on battery equal to brightness on mains power!

The problem is solved by checking and repair of the magic center pin of the power supply: there was no reliable contact and now all is solved in my computer. Brightnoise.