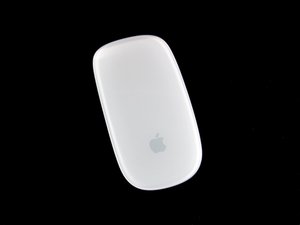 Why Magic Mouse curser does not move?

When i switch on my magic mouse, it stated connected in my mac but the curser is not moving. Button and scroll work well. It seems like the mouse laser is not functioning. Need help.

With bluetooth on and the mouse connected, hold OPTION+SHIFT and click the bluetooth icon in the menu macOS menu bar. Select Debug>Factory reset all connected Apple devices. Restart mouse & reconnect.

Didn't work for me... Mouse disconnects, then reconnects, but same behavior..

Above solution worked for me, thanks.

@ rmteixeira, I use to have the same issue as you, then I found that folding a small piece of aluminum foil and placing it between batteries and cover fixed the problem. I read that the Apple rechargeable batteries are a few cm too small.

@ Laura B, thanks! I am already using the card-inside-the-battery-compartment hack. Seems to be a different thing now...

seems to be working for me, thanks

thanks! seems to be working. so far so good :)

Easy solution : I got the same issue with my magic mouse 2. scroll works well but curson moving like drunken guy. when i saw the bottom of the mouse the lazer light is also clear. but i just took a small tissue and wiped those bulbs to make sure. then its started working nicely , then i found the reason that the laser bulbs are covered with some cream or oil, it can be anything , just try wiping the bulb @mouse bottom using some tissue paper , it should work.

So simple :) It works so well :) I had tried doing most other things before I read this- I'm old school (tech type) and I'm slightly ashamed I didn't think of doing this! Thank you Rajesh!

Had the same problem. My Magic Mouse 2 cursor was not moving even though the tracking was performing excellently well . I checked various online post for different solutions nothing worked until I saw Rajesh simple solution of cleaning the laser surface with a tissue, it worked like magic. I'm amazed how a simple solution like that took so long to find. Thank you so much.

I had the same issue and after trying all the recommendations still no success so the conclusion was that the sensor was dead.
Probably not worth for most but I was able to replace the part and it's working again.
with only a simple soldering iron is a little difficult but, a fun challenge.
You can find the part on Aliexpress, just search for "S7530SLV". 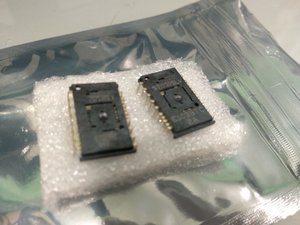 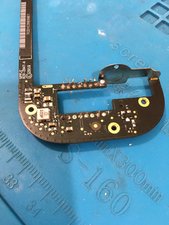 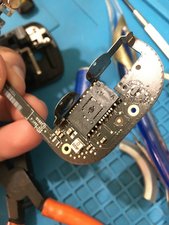 Had the same problem. Here's the process I went through to getting it working again:

Another set of fresh batteries. The same result.

Tried removing and re-adding the mouse in the Bluetooth Preferences. No difference.

Found a blog post that suggested cleaning the battery contacts. Mine looked nice and shiny, but I scrubbed them anyway. Still no good.

Delete the extension named USBOverdrive.kext in the extensions folder under \System\Library\Extensions. Restart the computer and it work.

"highlighted the mouse then under the gear menu, clicked "Update Services"

That is usually caused when the laser lens gets dirty.

Get a Q-tip or a small cloth like from a cotton tee shirt. Moisten it with rubbing alcohol, (not the drinking kind). Clean the lens thoroughly, then try the mouse again. If it still does not move, and the batteries are good, then its time for a new mouse.

I took a cue tip and went over the the tracking lenses. Boom it works again :)

I did the same thing to my ears but I still cant hear well. So I have to replace the tracking lenses in my ears. :(

I had tried everything, Some people had me going into all sorts of categories in system preferences. Nothing worked; I was already to buy a new mouse. Then I saw your suggestion - I figured that it couldn't hurt. I got my Q-tip and the mouse is back in business . Thank you so much.

As everyone has explained, the lens on the bottom of the magic mouse sometimes becomes dirty, smudged, and even some cases can develop scratching.

Most of the time the problem is the mouse not recognizing the movement of your hand. This is because the laser can't detect a surface. As everyone has said, check the clarity of the lens first. If you have done so and the problem still persist, check the bluetooth connection. Make sure there are no other connected mice, usb mice, or other unknown bluetooth devices in the "Bluetooth" pane.

Assuming this is the original Apple Magic Mouse check the terminal connections for the batteries too. If there isn't enough power circulating the mouse due to corrosion of the terminals, some features or normal behavior may diminish.

I was about to lose all hope and then tried cleaning the lens and behold! FIXED! Yippee!

I have the same problem. Try to remove both of the batteries and see will It work. If It doesn’t, try again.

Brillant!!! I've removed both batteries and now my magic mouse works flawlessly and besides it now doesn't make me spend with batteries!!!!! Woohoo!!!

Today I found our that the cursor of my Magic Mouse 1 didn’t move anymore as well.

the Green light on the bottom of the mouse is on all the Time after connection via Bluetooth. Therefore the batteries are good. Left and right click worked well and I can scroll in safari up/down/left/right with the mouse too. But no move of the cursor.

i have the same issue, did u solve it ?

Where is that Debug menu?

I have two magic mouse , everything function can used, but can’t moving

the surprise is why all my Magic Mouse can’t move?

Is there a protective sticker/cover over the laser? (It's not really a laser)

nope. i had been using it for few years and suddenly it cant move. I cant see anything cover the 'laser' part. as it do not have any laser lights like other normal mouse, i do not know what is wrong.

Apparently it is a common problem for these mice to stop sending signal. I found a couple videos, if they do not help then you may just have a bad mouse... But I hope these help!

I would recommend trying these out in the order they are posted.

thanks for the recommendation but it does not work. My Magic Mouse connect well to my mac, it is just that the cursor is not moving. button and scroll work fine. Might be my mouse is broken.

You need to disassemble and put a soldering iron on the laser pinouts. It's worked for me.

If you run Windows via bootcamp restart in Mac to remove Airpods and re-connect Magic Mouse.

This solution is like just don't use your mac

I had the same problem. Turned out that the issue was I have a glass top desk. I tried a variety of things (restarting my computer, reinstalling/uninstalling the mouse, etc.) I happened to move the mouse onto a notebook and bumped it and noticed the cursor moved. May not be your issue, but for some reason it wouldn’t track on the glass top desk. Maybe there is some type of reflection confusing it? Not sure but thought I’d throw that out there for anyone else that has a glass desk.

I had the same problem, I bought Electric contant spray, I sprayed a little on the eye of the mouse, and now it works

Recommend before do something to spray a little

Push the mouse lens with a soft nib (not to scrach the lense), some how it works again… its surprised me.. may be some connectors got loosed.

I had the same problem and fixed it by pushing in one of the 2 black plastic rails that are at the bottom part of the mouse. It probably came detached when I dropped the mouse a few days ago

It is hard to believe but in my case. I checked the battery, sensor everything looks good. Reconnection helps a little bit but it will come back again. Turned out if I leave my magic mouse far from my wifi router then the problem has gone. So for some reasons there is some sort of signal interfering happening. Hope this help.

My Magic Mouse works normally without the protective cover. When I put it on, it stops moving the cursor normally. Moves only left and right, but not up and down. Any idea?

My Magic Mouse suddenly did the same thing on me. It connects but only cursor and swiping works but tracking doesn’t at all. I already cleaned all the bulbs and the inside where the batteries go and blew it with compressed air to make sure all dirt is out. I unpaired it and reset it to factory settings too. Same thing keeps occurring. I put in freshly charged batteries. The tiny green light isn’t on at all even though the mouse is connecting and everything else is working. Help please?

My wireless mouse doesnt track. However if I run my finger over the sensor, it tracks.

If I turn the mouse mat upside down and track on the soft rubbery surface it tracks much better.

Must be an issue with the lense

I found a simple fix that works great for me.

Much to my surprise, removing the black plastic rails allows my Apple Magic Mouse to properly track motion when I slide it around. The black plastic rails have been problematic for years, as they kept falling off. These rails are not really necessary, as long as you use the mouse on top of a cloth mouse pad (otherwise you’ll hear annoying scratching sounds as your mouse slides over your table top.

I am not certain why removing the rails is beneficial, but I have two guesses:

In any event, removing the black plastic rails solves the problem. I am delighted to once again have a working Magic Mouse.

After my Magic Mouse (deliberately) went off the rails as described above, it worked fine for a while but then had trouble tracking movement. It still responded to gestures such as scrolling. Eventually I discovered that when operating the mouse without the black plastic rails, the optical sensor is more prone to pick up lint that interferes with motion detection. Blowing the lint out restored my mouse to normal operation.

Try turning the Magic Mouse over so its underside is facing you, then blow lightly in the circular hole that's located just to the left of the on/off switch. By doing so you're clearing out the dust (I think). This has worked for me a few times.