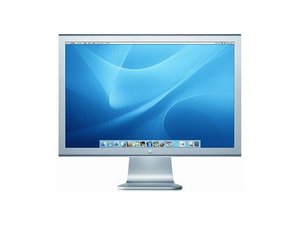 My display is intermittently not lighting usually after waking from deep sleep and seems to be getting worse. I've isolated it to the monitor not the video card. Apple wants ~$800 to repair it but I can find displays on eBay for $100-300, some with destroyed cases. If I purchase one of these how do I install it in my current housing? There are no obvious ways into the aluminum case (no screws I can see). I'm an engineer and have no qualms about opening it but I'd like some direction on how not to damage the case when opening it.

i've posted 2 links Need a good source for taking apart a 23" HD Cinema display<- this is a link ;-)

1) plenty of workspace / soft towel or similar on bench

3) Remove the 4 small fixing screws under the hinge ( Torx) and ease the foot/hinge assembly off the screen. Springs etc all stay in place and the foot is easy to put back on afterwards.

4) Carefully ease off the two plastic side cheeks ( thin craft blades or similar ) starting at top or bottom edge. CARE - they are held by thick super-grip pads & will break if forced. NOTE the small cable to the power button on RHS. Warming with hair drier can help.

5) take the 4 screws out of the long metal plates now exposed on each side and lift the plates through 90' to disengage the hooks. NOTE how they went on and put to one side.

6) Locate the two small metal tags now exposed at the lower edge on each side - pull outwards about 5mm in order to disengage the catch assembly along the lower edge.

7) held upside down (assistant useful) the bottom edge can now be held open about 5" or 6" ( NOTE the small cable to the power LED as you open the case), and the LCD assembly can be carefully removed taking great care NOT to scratch the panel on the now exposed and sharp metal lugs. Ease the heavy cable through its hole as you go.

8) The main components visible are the wiring harness, the Inverter board (LHS) and the Power / signal board on the RHS. Be careful if replacing the power board as there was more than one variant of this (the upper right signal cable / socket can have 15 OR 16 pins).

9) Spares are not easy to find, were not listed by Apple and so almost always come from cannibalised broken screens - so be sure of the source you buy from.

10) Re-assembly is of course a systematic and careful reversal of the above.

A good many of these displays suffer from a flashing power light when turned on and it appears that this can derive from a problematic signal on a ground sensing pin from the main board via the power lead to the power brick.....

a) Examine the power plug ( i.e. the one that plugs into the power brick) - its pins are duplicated on both sides so that it can be plugged in either way around. The centre pin ( on both sides) is where this 'ground sensing' happens.....

c) Using a thin tool, gently push the tape into the plug at its centre, i.e. so it forms a loop into the plug, covering the two centre pins ( and no others) with an equal amount on each side sticking up out of the plug. If it doesn't work first time, cut another strip and try again.

d) once fully pushed home, carefully fold the excess tape on each side back over the plug shell and the carefully insert into the power brick. Test the display.

Its also the case that some of these monitors consume more power over time and can get to a point where they are demanding more than the power brick can supply - resulting in the power brick clicking on and off ( safety cut-out ).

Equally, an old / tired PSU can sometimes reach the point where it can't deliver what it was designed to do and again, may start cutting-out as the display draws power.

For the smaller screens, using the psu from a bigger screen sometimes works where the original psu will not....... If however, you suspect that the screen has power issues ( burning smells / frayed or charred leads/ etc etc), then use common sense people and DON'T give it more power to cook itself with !!

A late-in-the-day post I know, but there are still plenty of people out there using these ageing displays, so maybe these 'tips' will help someone keep their Cinema display going a bit longer, but please be sensible people, I accept no responsibility for you cooking or frying a monitor that's in bad or unsafe condition.

Hi there, thanks for your guides...

Just wondering how the ground signal goes to earth if you isolate the ground pins ?

PS : I need the answers but it works for me :) Thanks man

While the schematic circuitry for these monitors doesn't appear to be in circulation (I've never found any), it would seem that the centre pin is not the monitor's grounding point but is a ground 'sensing' pin...... i.e. seems to act as a 0v reference point. WHY isolating this sometimes works is not clear (to me), but that fact that it often does.....is useful !

I've been lugging one of these screens around for years... I knew someone would eventually share how to repair the problem with flashing power light!! Thank you!

if you take and cut the insulation closest to the power in on the monitor and cut away the metal shield material until you have the 2 wires showing that will fix the problem. just tape it together, you want the metal shielding completely stripped away where you only have 2 wires left showing.

Hi im at the same place your at. But i did attempt to doit it myself. I have a apple 23" cinema display. The right side has the power and brightness touch buttons. If you have the same Then these side panels are held by double sided sticky tape. be careful though as there is a wire you can snap.

From this point you can start to feel your way to breakdown the monitor.

Darren, that is a great answer. Only problem is that the question is way over 2 years old and has not been commented on since then. I think you should make a guide out of this and post it with the Device on here. That way people looking for help would know where to find it. http://www.ifixit.com/Guide/new/Device/A...

I have a Cracked Screen HD Cinema Display and wanted repair by buying new screen and replacing it but I have no idea where to get the LCD screen from. Any suggestions

Apple cinema display 23", first some times do not open, solution open power supply and i find one "balloon" capacitor, after that change, work perfect again, now, make black screen with sound, and after few seconds open again, i check power suply with multimeter, and I see is not support 24 volt. i try to insulating the middle arc from power usb, and work again, I suppose its power supply is foul, and not the monitor