投稿: "Why does my psu keep breaking?"に関する回答

Why does my psu keep breaking?

my ps4 pro keeps blowing power supplies. the lights won’t come on or anything. i change the psu, it works for a little while and then blows again. why is this happening?

If your device blows one power supply that’s random enough, but for it to blow a replaced power supply leads me to believe that your home wiring could be causing the issue. If you have a bad ground on the circuit it’s plugged into or if something is causing power surges that would result in the power supply blowing a fuse which exists to ensure that a power surge can’t fry your entire system.

Usually with any device that uses power through the wall theres a safety fuse to ensure that the 120 volts from the wall doesn’t destroy the device in the event of a power surge. If a surge happens it will cause the electricity to move into the system and without a fuse it would destroy the sensitive components on the device.

120 volts is a substantial amount of electricity and its far beyond what any household product needs (except a dryer and some stoves). Thats how you’re able to connect multiple devices with a power strip through one plug. Electronic devices use a power inverter somewhere in the device which takes the 120v and scales it down to a fraction of that in order to provide the power level needed for the device to operate (usually a few watts).

If the full 120v surges beyond the power supply capability, there’s a fuse which is designed to handle a set amount of current and anything more will result in the fuse blowing which leads to a new fuse being required (most likely in the form of a new power supply unit) which does suck but if that fuse wasn’t in place then the surge would fry the chips on the logic board and render the device unfixable. I would investigate your circuit and see if that’s your issue.


投稿: "Why does my printer keep saying paper jam but non...

Why does my printer keep saying paper jam but non seen?

I have done everything possible( cleaned the rollers, reset the printer, checked to ensure that there isn’t any objects stuck in it) but it just keeps saying “ clear paper jam” every time I try to print something. I’m going cookoo

Reset the printer. that worked for my HP 6968 printer. remove the power cord from the back of the printer while its still turned on & idle. i kept it unplugged for about a minute or two and the paper jammed error was gone. just to be sure i restarted my laptop and wifi too.

PS4 Slim, And it had Last Saturday (22/09/17) Failed refusing to accept disks, bearing in mind it still worked, on games such as fortnight.

He Decided to take it appart and we found that most likely the disk drive needed a full replacment as cleaning it out did not fix it, When it was put back together it now bootloops, and refuses to start up, continously giving an error.

It Worked before the disk drive, why does it not now after the disassmbly as it turns on fine, and seems to have no problems other than entering the OS, he tried reinstalling the software on the HDD from a different ps4 then transfering the drive back to no avail.

Any Suggestions would be helpful

I think u have to use the circuit board from the old drive to make it work because it is registered to that mother board. that’s what i’ve heard atleast.

The CD spins for a few seconds and then it stops. Then I get an unrecognized disc error. I have replaced the ribbon cables that attach to the motherboard and nothing.

Can anyone help me?

You need to use the orginal motherboard that was with that replacement drive.

Where is my camshaft position sensors on a 3.5 v6 ecoboost

hillmatt26  looks like your engine has 4 variable camshaft timing solenoids , 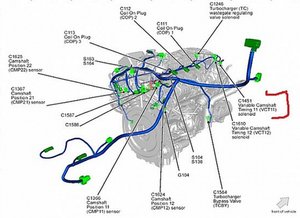 As you have an older 2011 MacBook Pro you really need to replace the HD SATA cable.

The original cable is not able to support the I/O data flows your SSD can push unlike your old HDD did.

Apple never offered a SATA III (6.0 Gb/s) cable in this series you need to jump to the 2012 series to get the correct cable MacBook Pro 15" Unibody (Mid 2012) Hard Drive Cable and here’s the guide you’ll need to follow: MacBook Pro 15" Unibody Early 2011のハードドライブ/赤外線センサケーブル You also want to place a strip of electrians tape on the uppercase where the cable crosses over to help protect if from the rough aluminum surface. In addition, you don’t want to crease the cable at the folds! This damages it! Instead use a bamboo skewer or the ink straw of a ballpoint pen to help you roll the arc at the needed bends.