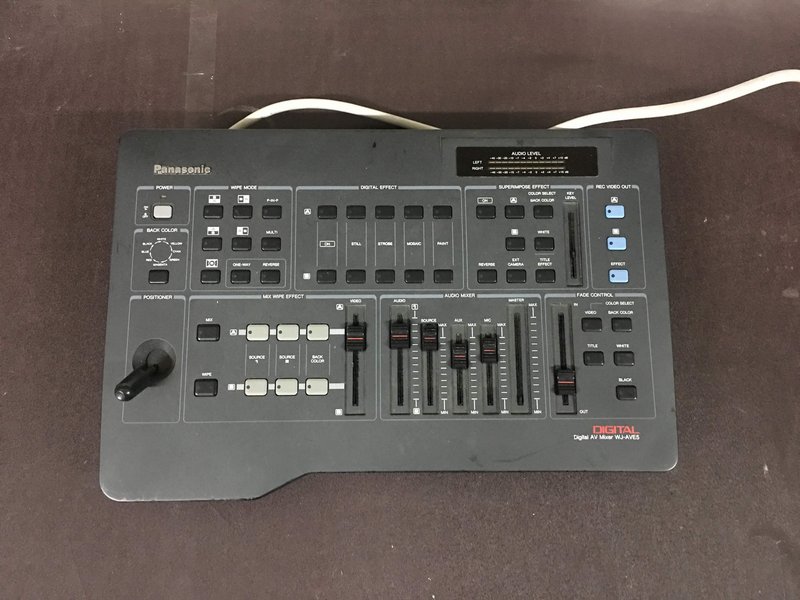 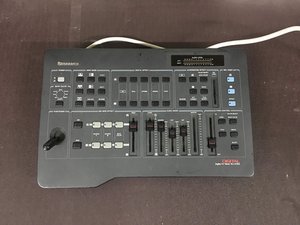 The WJ-AVE5 is a audio/video mixer produced by Panasonic. It can perform wipes, fades, and picture-in-picture on two composite or S-video sources.

The WJ-AVE5 is a digital audio/visual mixer released by Panasonic. It can combine multiple streams of video, allowing you to jump between them using a fade or wipe. The top panel of the device has various buttons that allow you to adjust the direction of the wipe (horizontal or vertical), the shape of the wipe (square or diamond), or the number of simultaneous wipes to perform. You can see this WJ-AVE5 demonstration on YouTube for a visual explanation of the device.

You can identify this mixer easily by looking for the model name “WJ-AVE5” printed in the lower right corner of the device.

The back of the mixer sports a variety of inputs and outputs. The two main video sources (source A and source B) have matching stereo audio inputs and support video in both composite format and S-video. While the S-video input connector is standard between all versions of the WJ-AVE5, some revisions have an RCA connector for composite and some have a BNC connector. All models have two dedicated audio and video outputs with a third output supporting video only (usually for a monitor so you can watch your work real-time). The front of the device has an additional input for a microphone. You can mix all the audio signals with a separate set of sliders on the top panel.

While the WJ-AVE5 can be used well in conventional multi-camera video setups, many hobbyists also use it for video bending. As this YouTube video shows, you can use the WJ-AVE5 in interesting ways to make distorted video that still displays correctly on a monitor. You can see another example of video bending using the WJ-AVE5 on the Lush Projects blog.