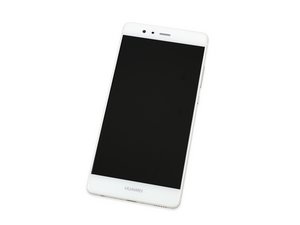 Power Issue with my Hauwei P9

I have just recently done a 'screen' and 'battery' repair on my Hauwei P9.

I managed to replace the screen and I am able to use my phone again, YAY!

Ever since I replaced the screen and battery I am now having a major problem.

First of all, it kept coming up with a message saying, "Temperature too high, functionality limited". After noticing this message I noticed the lightning bolt charge symbol had disappeared. My phone was no longer charging so it seemed. And then the phone died even though the battery was on 35%.

So I then immediately disassembled the phone and switched the new battery around wit the old one. (only reason why I changed the battery in the first place was because it was draining fast).

Now this is where the confusion lies.

After putting the old battery back in now my phone still WILL NOT charge. But it no longer comes up with that message, "temperature too high, functionality limited".

That battery was DEAD it had NO power left in it.

My phone wouldn't turn on unless I plugged the charger in. So the charger is DEFINITELY passing current because it is somehow keeping the phone switched on. But it is stuck on 2% and every time I unplug it it dies. It seems to be holding the minimum amount of charge required too keep the phone on whilst plugged in, but without it being plugged in the phone dies.

What on earth has happened to my phone?

P.S I am still able to transfer files to and from my PC by using the USB cable

I have changed the charge port and battery and it is still not charging. All connections have been done right so it must have something to do with the motherboard. Looks like im going through insurance

I did exactly the same with you, changing battery and lcd display. then I had this problem. I observed that when I removed housing and then charged it. battery charged like normal. So I was assumed that It should be some problem with the housing and main broad. Then I tried to cover battery connecter by insulation tape. Then I assembled the phone. It has been working find until now.

Had same issue with replacement battery

After replacement battery isn't charging. Problem is in bad connections

Problem is that there was no error message about battery temp.

You sure you didn't just plug in the cable from the logic board to charging port the wrong way?

I did this on a Google Pixel XL and it caused the phone to short circuit and not charge or turn on. Luckily just correcting the cable being plugged in reversed fixed it.

Not sure if it will work on the Huawei P9 but I always make sure I never mix it up. I have done screen replacements on Huawei P9 before.

I see, however the charger does pass current so it must be connected somehow. Plus I can't see how It could be plugged in the wrong way its just one flex connector?

I can clearly see two connector ends on the ribbon cable that goes from logic board to charging port. There is a arrow on the cable that is supposed to face / point to logic board.

Oh right yeah I get you. Nah I left that where it was I didnt touch the flex cable except from disconnecting the motherboard end.

Are all of the mother board screws the same size ? I know that on an iphone if you put screw in the wrong place you can pierce the motherboard and cause damage to the IC chip. Can the same thing be done on a P9? If so then there could be a chance that I have put the wrong screw in somewhere and possibly damaged the charging part of the motherboard, but if this isn't cause what could be wrong???

The screws for charging port area and logic board are the same.

Ironically I just did a huawei p9 screen replacement yesterday.

It's a PITA to glue the screen on.

Yeah my adhesive came today to stick the screen on. Pointless though unless I fix this. I took it to a shop they said its probably not the battery as I put a band new one in (despite the fact it was from ebay and could possibly be faulty) but apart from that or the charging port/flex cable what could it be? When I put the charger in the lightning bolt appears for less than a second and then it disappears!

Same here, Chan's solution worked for me, thanks.

Leading up to it though I had a tougher time with the touch screen not working until I downgraded an update or two. I have the P9 Plus Chinese version (A10) and could not make anything work until I rooted it. I've since relocked the bootloader etc and everything's running fine.

Hi, i'm having the same problem but i didn't understant what Chan refers with putting insulation tape on the battery connector, you have any picture of this?

I'm having same problem, but when I disassembled my p9 it's still not charging so covering battery connector have no sense :( I tried to change USB port with whole board, and still nothing. Maybe someone have another idea?

I had the same problem, I solved it with a piece of aluminum foil through the connectors on the motherboard from the LCD and battery ... ;)

What do you mean "through the connectors on the motherboard from the LCD and battery "? Do you have any pic that shows it?

Hi guys, I just had the same problem. I discovered that on the new battery, on the connector, two of the terminals had been short circuited from manufacture. Once I removed this short circuit it started charging.

This would make sense it's the problem as likely one is in feed to the battery from the charging port, the other is feed to supply the phone from the battery. By short circuiting, when plugged in, the phone receives power, but the battery does not.

It's on the charger now and going up, but I'll update if I remember in case I have any further problems.

I have a slightly different problem on mine. The battery charges, and appears to take the length of time that you would expect, and goes up to 100%. Disconnecting any charging device and turning the phone ON, within about 30 seconds it says “0% battery remaining, phone turning off”.

Anyone else experienced this?

Hello i am having a similiar problem on my Huawei p30 lite.The phones motherborad drains out the baterry and dont let it charge

I owe 2 same phones and i dissasembeld both of them.I tried to connect them with all other parts and … I determined that both motherboards work perfeclty fine but that one drains out the battery,while it is connected to the charger i recognizes the charger but it is not charging.When i connect it to the charged battery it works fine until it drains out.

I dont know from where i should start in this situation.I know it is to the motherboard but what i should do or try?

any help is welcome