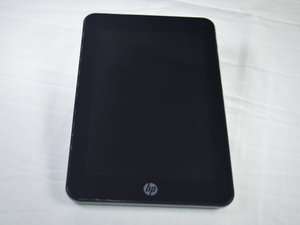 This tablet is a fast multi-functioning device. It can surf the web, take pictures and provide quality gaming.

The screen on my tablet is stuck on the main screen and not responding to touch.

Check to see if you have any apps open and running in the background. Try closing them all. If this does not work, check the HP Slate 7 Plus Troubleshooting page where it will show you how to perform a soft reset, hard reset, and a factory reset.

I have the same problem on my HP Slate 7 Plus; touch screen gradually failed. I attempted repair, and checked all connections, however although I was able to get the LCD screen to work properly, the touch screen is completely dead. As of this date, I could find no replacements for the HP Slate 7 Plus, either new or used. (The HP Slate 7 is a different model, and those parts won’t work).

You can get around the touch screen however, by using a USB mouse, and a micro USB to USB adapter cable adapter (female socket). Android system will apparently recognize a mouse attached to the micro USB port on the tablet, and will present a cursor which can be moved around to select what you’d otherwise be able to do with your finger if the touch screen still worked. Pretty clumsy second choice, but at least the tablet can still be manipulated with that.