I use ifixit so much and always find my answers here but now I'm stuck.

I've got an 27 inch core2duo late 2009. After booting the screen turns black (so I see the apple logo and then the screen turns black, the machine stays on and I hear the HDD). I tried the LCD on a different iMac also late 2009 and then I got it booted but after a few seconds it turned black again but you hear the HDD run. I exchanged the LVDS cables and they both do the same. I know the LCD issn't completely broken because it sometimes works...

Question is: whats causing the LCD to turn black after a few seconds? 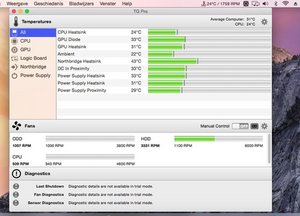 Dan included is a screenshot os temperature gauge pro. I kept on googling and I think there is something wrong with the led strip on my LCD or the board steering it.

I finally had time to take another look at my iMac (%#*@ exams!). I did what you said and aimed a flash light at my screen and indeed I see my desktop icons. I plugged an external monitor and the desktop is visible on it. Video's work perfect so I know its not my GPU. Sometimes when I hit the on/off button the screen is visible for about 3 seconds. Strange thing is that my other LCD from my other 27 iMac didn't work ether on this iMac and also didn't this LCD didn't work on my other iMac. So I'm quite sure that the problem is in my LCD. But how can I fix this LCD?

Did you download Temperature Gauge Pro? What does it shows you on the LCD panel temp sensor.

Can you aim a flash light at your screen at a low angle you should see your desktop icons. If you can you know the displays backlight system is failing. You can also try plugging in an external monitor as well to see if the desktop is visabable on it.

The next issue here is why is the display winking out. You may want to download this app: temperature gauge pro it will allow you to monitor the internal thermal sensors. What you want to check out is the LCD display sensor. Post a screen shot for us to see.

Dan, no I didnt becouse there is no lcd sensor connected.

Please double check running the free version of the app. I think you'll be surprised its there.

Several days ago it started happening to me. I read everything I could find ... one thread was 17 pages long. The best I could do was run it at 20% brightness. If I got bold and tried to nudge it a bit higher ... <POOF> ...

But, just as a wild guess and maybe in frustration I jammed (in one nanosecond) that *!&*^#% screen brightness slider (not the brightness button on the keyboard) to full 100% brightness. And nothing happened! It stayed on, and that was several days ago. The next day I tentatively lowered it to about 80% (where it had been set for a couple of years) ... and all is well so far. Try it. Nothing to lose.

Hey man, this works until one hour and that is a record!!!

This crazy solution also worked for me too for a couple of days then back to the same problem. When it worked, I just used sliders. I set it to max and then to about 1/2 brightness.

iStat and TG Pro both running and saw no anomalies with temp sensor readings. AC/DC on iStat reported 50W for late 09 iMac 27" doing nothing and lowest brightness setting. Sliding brightness 1/2 way kicks this to nearly 100W.

I'm guessing the real problem is the LED solder degrading (with heat over time) and introduced varied resistance. Backlight circuit checks all the LED voltages to ensure its equalized. If not, turn off. Different range of brightness will result in different acceptable equalization range. Therefore, ultra dim and ultra bright seems to be what works until ultra bright affects the poor soldering further. Here is a link on voltage measurements to 6 LED circuits

Finally got around and fixed this. iMac 10,1 27” couldn’t go past lowest brightness setting before backlight eventually turns off. Just reflowed the LED solder joints and fixed this. Require full disassembly of of the LCD assembly (so need good electronic repair skills) + good fine tip soldering tools. No easy but fixable. Full directions here

Exact same problem, which happened after a HDD replacement to SSD on a late 2009 iMac. I salvaged the circuit board from the old drive to keep the HDD temp sensor in the circuit to control the fan speed.  The display blackout started almost immediately after replacement.  I replaced the LCD temp sensor but to no avail. I wonder if the apple built-in diagnostic process looks for a delta between the various temp sensors and shuts down the display if there is too wide a disparity between them? Thinking of trying the inline digital thermal sensor cable from OWC.

Hopefully helps, Also turn iMac upside down, there are 4 diagnoatic leds, they are in

4=screen detected, they can bee seen through the speaker grille underneath near ram slots

Same story here just had this happened to me to day on a late 2009 iMac. I hope you didn't go for the OWC thermal sensor cable as it's not gonna solve your problem. I have two possible culprits in my mind. Either the V-sync cable which seems to be a bit damaged or some component I knocked off the board.

Weird thing is that temperature gauge pro does not read any peripheral sensors apart from CPU and GPU.