Any suggestions on ghost touches? 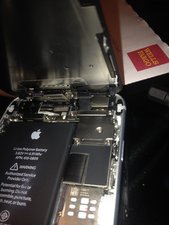 I put a black screen on my silver iPhone 6 and I'm having issues with ghost touches. Seems like I got the other phone perfect because it hasn't had any issues. Did a little research and it does work perfectly when the screen is detached and the top of the screen near the earpiece speaker is elevated. So I'm pretty sure putting electrical tape in the right place would help since that's what other did to fix grounding issues. Also the ghost touches got much better when I untightened the front panel assembly cable bracket screws a little. Any suggestions on where to put the tape or how tight the screws should be exactly. Already tried putting tape on the LCD shield plate by the cable bracket (how it is on the 5c) but that didn't work. 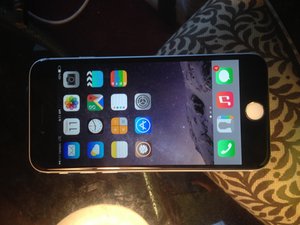 Are you 10000% sure you have the LCD plate screws back in their original positions? Mixing up the screws can cause a variety of issues on the 5 series, and I am pretty sure on the 6 as well.

Ah I guess that probably is it because I did happen to drop one of the screws and I just used a screw from a 5C of the same length.

Turned out to be the battery, was swollen and wasn't lasting as long. Source of static.

I have been struggling with this (iPhone 6 phantom touches, and unresponsive screen) for a year. I knew it was some kind of hardware problem and I had figured out a way to bang the phone on a hard surface which would usually get it to work again for a little while.

I am an engineer and wanted to open it up to see if I could see the source of the problem. I followed the procedure for replacing the screen of an iPhone 6 on iFixit.com you need an 0.8mm pentalobe driver and a plastic knife or something to pry with and a 000 Phillips head driver. I disconnected the 4 data connectors for the screen and then reseated them. This is tricky, but there are some tips on the iFixit site. Put everything back together, and no more phantom touches and no more random unresponsiveness.

It is fiddly work, so you would want to be reasonably confident you can do it, and have a steady hand and good eyesight. Otherwise just take it to a place that replaces screens and ask them how much to re-seat the connectors. For someone skilled it is only a few minutes work, so shouldn't cost too much, and if you are struggling with phantom touches and unresponsive screens, it's worth a try. It fixed mine.

What part controls the typing in a iPhone 6s

I have a customer who has experienced Ghost Touching on 3 different iPhone 6 Displays. This is over a period of 2-3 months. I've since changed suppliers but I haven't had issues like this with anyone else.

the problem is the screen is defective, try a new lcd and that should help you out big time