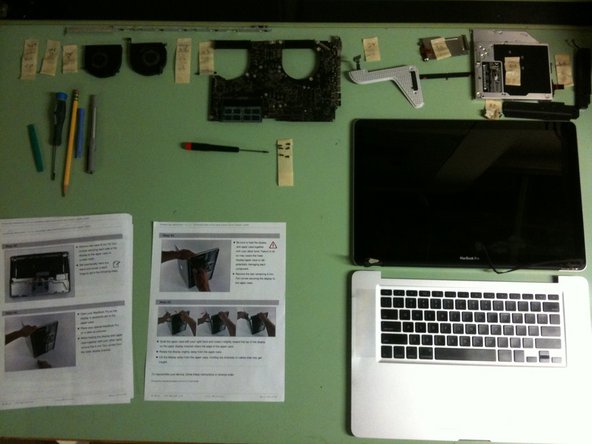 Spilt beer on keyboard. After a dry out period I confirmed that the computer still worked, as did the keyboard, but after a brief warm up period the keys would get sticky and the aroma of the the ale became more evident.

Great walk though. I took it all apart the day before it arrived and put it back together the next day.

I used masking tape to hold the screws as I removed them. I labeled them first with the step I was on and the size and amount of the screws(ex: step6 10.5 x3, 3.7 x2). This worked out great. Because of this I realize the numbers in step 8 are flip-flopped. There are two 3.5mm Phillips screws and four 3.2mm Phillips screws.

Also of note: the replacement top case came with a new battery connector installed so step 27 was unnecessary. Also, not mentioned in the guide is the removal of the plastic beam that the optical drive, one of the fans and the logic board all connect to - this was needed as it didn't come with the replacement. Also, I used this opportunity to clean out the fans with a q-tip after removing half the cotton.