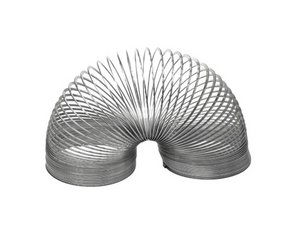 Repair and support for Slinky Toys. A coiled spring made of metal and/or plastic.

The Slinky is an iconic, helical spring toy that was invented in the early 1940s. In the 1970s, the Slinky went on to have an equally iconic earworm jingle ever to have been created for a toy.

Invented by Richard T. James, the popularity of the Slinky was immediate and is still popular today spawning other Slinky products such as a Slinky Dog and Slinky Worm. The invention was an accident and occurred when Richard James, a naval mechanical engineer, was developing springs to support sensitive instruments in rough seas. He knocked one of the springs from a shelf and watch it 'step' end over end from a stack of books to a table top and to the floor.

The original Slinky is made of metal that can stretch and reform itself and do a number of tricks. The most popular is making the Slinky go down a flight of stairs. The coil design works with gravity to stretch end over end down the steps, seemingly taking a life of its own. The Slinky is ready to play right out of the box, does not need to be charged or require any batteries and hardly needs any instruction on how to play with it.