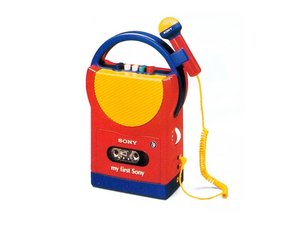 A children's cassette tape player and recorder produced by Sony in 1991.

The My First Sony Cassette-Corder TCM-4500 is a children’s cassette tape player and recorder produced by Sony in 1991. Sony Corporation (commonly known as Sony and stylized as SONY) is a Japanese conglomerate headquartered in Tokyo. Sony operates as one of the world’s largest manufacturers of consumer and professional electronic products, the largest video game console company, the second-largest record company, the second-largest video game publisher, and one of the most comprehensive media companies.

The My First Sony Cassette-Corder TCM-4500 operates on the main principle of audio amplification as a cassette-recorder or -player. The toy operates on four 1.5-Volt dry batteries and includes a permanent Magnet Dynamic (PDyn) moving coil (3.5-inch) loudspeaker. The cassette-corder is made from modern plastics and does not include any Bakelite or Catalin materials. The device also includes an external microphone and sockets for optional power adaptors and two microphones.

The My First Sony Cassette-Corder TCM-4500 can be identified by the name “my first Sony” in white font on the front face of the device underneath a red switch that acts as an on/off switch. The name “Sony” is printed in white capital letters above the red on/off switch. The device features a mainly red body with yellow and blue accents.