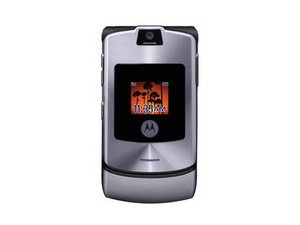 The Motorola Razr V3c is a CDMA2000 version of the Razr.

The RAZR V3c has a flip design. It has a screen on the front of the phone, as well as a Motorola logo, in the shape of a circle with an 'm' in the center. If it's a V3c, it will have a mobile carrier logo on the back as well as the Motorola logo. Some feature may be disabled.

Motorola initially released the original RAZR in 2004. The upgraded V3c was released a year later, in the fall of 2005.