Is it possible to replace JUST the keyboard on a MacBook Pro?

I'm wondering if I can replace the keyboard on my MacBook Pro without having to replace the whole top case. Is that possible?

Yes you can replaced the keyboard on a Macbook Pro Unibody. In fact, I have successfully replaced several. However, it does require patience and the hands of a surgeon. I'm really not sure why some of you "Professionals" who suggest that it is impossible when all of you know that it is very possible to replace the keyboard on a Macbook Pro Unibody. Guess you guys need to sell top cases.

My power button and keyboard stopped working last week. I was able to replace my keyboard by watching a youtube video and some very detailed pictures on ifixit, it cost me $22.00 (free shipping)for the keyboard on ebay and $43.00 ($50, on sale for $34.99 and used a $5.00 coupon I found on the internet, so $29.99 plus $12.99 shipping) for a really good 64 piece precision driver kit from ifixit, was not easy and took around 2 hours, but it works great...I know nothing about computers and was able to manage this repair with no trouble...

is the look of the keys exactly as your old keyboard? I've seen some replacement keyboards (from China maybe) with a different black tone... thx!

I replaced my keyboard on my 2012 Macbook yesterday. It works perfectly! It does take some patience to do, but is not difficult to do at all. The keyboard cost me $38. The most intimidating part was removing the plastic keyboard backing plastic and ensuring it does not tear during the removal process. The huge amount of small screws attaching the keyboard to the unibody took the most time to undo and redo. Other than that, the repair is not too bad for the average person to do.

As far as I'm aware all 15" unibody use identical keyboards (same model number of computer since 2008). Maybe 2012 model different. That said I was able to remove milk from 20-25 keys using an x-acto knife a very pointy tweezers and "canned air".

The problem with these keyboard and impossible to repair is that the three layers of plastic are glued together! In the old days you could peel apart the layers and clean with dish soap and re assemble.

If you have fewer than 10 affected keys it would be worth the effort of a top-side fix as long as you realize the risk of needing to use an external USB keyboard while the replacement comes should you break it.

If you look at any single key contact you can see the two layers with the crossing traces going to the center. The process to clean out the milk etc. is this:

On the TOP LAYER, determine the direction of the trace, example horizontal. Now make two in incisions on either side of the center cutting in that same direction on either side of that trace. Cut through top layer only and INSIDE the AIR BUBBLE surrounding the center. Now use the likes of a SEWING NEEDLE to lift up the top layer between the slits. Next use canned air to vamoose the contents in the air pocket mucking things up. In my case it was milk. If its thicker like oil you may likely need to use a solvent to flush it out.

I had 100% success with the 20+ affected keys. Took a couple hours. Sadly a cat knocked a whole glass of water on same fixed keyboard 6 months later and killed it.

If you manage to kill your power switch I have a "jump start" process. I have a YouTube video showing how.

awr, thanks for those detailed directions. 1 question- you mentioned above that a liquid spill can actually dissolve the traces. If that happens, then I guess these keys are not repairable by this method?

Ever since the keyboard layers started being glued together it limits the repair options. When I did the water removal method described keyboards were not available and it was $300 minimum replacement part. Now you can buy a keyboard for $25-40 just replace it. When I do i usually put some color film to knock down the ludicrous brightness of the keys and group them (blue row for numbers amber for keys for example)

Actually, we've managed to pull it off, BUT there are well over 50 tiny tiny screws and it's tricky. See steps 29-32 here.

Th backlight is a sheet that fixes to the back of the keyboard like a fancy sticker. You could definitely replace just the backlight if that's the only part not working.

I have done this repair several times. I had somebody say that apple did it for them for $130 but now that I think about it, that HAD to be pre unibody!

When i replaced my own keyboard, I put tinted tape over different groups of keys (yellow alpha, green numbers etc). De-tunes the brightness and makes the mac much more eye friendly.

It's a shame that the film layers on the new keyboards are glued together. I've repaired about 10 keyboards in the past without having to replace by separating the layers and cleaning them.

Usually if liquid gets into MacBook Pro keyboard it will dissolve traces or the "glued" interconnects making the keyboard a total loss.

Fortunately. $35 and an eBay account will get you a new one.

Unfortunately a "level 8" difficulty of repair. Almost impossible to avoid stripping one of the 60 or so screws. One of the ones on the keyboard I just removed had only 40% of the screw indent making it nearly impossible to remove. Use a good set of hardened steel bits! 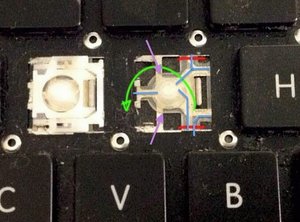 the blue lines are the wire traces you can not disturb.

your best bet is to separate the films where the purple arrows are; get a needle, or x-acto point between the three films of plastic; doesn't matter if between 1 and 2 or 2 and 3 layer. insert on both top and bottom where purple arrow are and then use a 'canned air' to blow the liquid out.

unfortunately there is a good chance that if a 'string' of keys are out, what has happened is that the trace is actually damaged between the layers, where it was 'glued' together.

I had over a dozen keys that didn't work properly but sometimes worked because milk got in there, and on the model of computer, the films were more solid, so i had to cut slits, but in your case, you can see the EDGE of the film sandwich, so you can peel them apart (they are glued), just enough to get an air blast in; if you pull too far you risk tearing the fragile silver trace .

Yes they're selling keyboard on eBay. Unfortunately you can't replace them on the 13" Unibody Macs. The keyboards are so emplaced that removing them without tearing the top is impossible. You have to replace the Upper Case. We would need to know your exact machine to direct you to the exact keyboard.

This answer in 2010 was true but later models have screws instead of brads. Now they have gone back to brads, so you just don't know till you look.

The keyboard of the mackbook pro 13" is fixed to the case by 60 or so tiny screws, and you have to remove the logic board and optical drive to reach the keyboard, but it's definitely doable. I got a new keyboard and backlight for 30 bucks, free shipping on Amazon. It's not terribly difficult to replace, just tedious and requires a close following of instructions if you're a layman. Took me a little over two hours.

Hi, I do not agree. I replaced my 2012 unibody keyboard without issues. It is not too difficult to remove the plastic layers if you carefully lift the glue of the three sheets with a screwdriver.

I was specifically talking about the 2008 model when this question was answered. Later models are replaceable.

So basically, officially, and easily, you cannot, however if you think you're at the right skill-set, and have the time/patience, then use the teardown and try to do it yourself. You'll probably also be voiding warranty, so unless you're rather experienced and not under applecare I wouldn't suggest you do it.

At least officially that is not possible, my apple parts supplier can only look up the entire top case including keyboard as a part number, BUT people on ebay are selling the keyboard by itself so perhaps you have hope after all ... if I remember correctly there are many, MANY screws attaching the keyboard to the top cover ..

Don't know if its against the rules to post ebay links ... if so sorry ...

So .. yes, you can but its a pain in the backside, get some cups for the tiny screws if you are going ahead with the repair as they are gone as soon as they hit the floor ...

Not against the rules at all! If you have a source for parts, post it!

if the keys stick that is causing the problem, try to remove the key cap and clean it with alcohol.

You'll have to disassemble the notebook as it shown in one of the guides on iFixit and access the keyboard. After that you carefully remove the backlight and unscrew the keyboard. 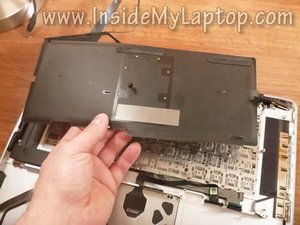 I'm typing on a MacBook Pro with replaced keyboard. :)

Hi, I have a problem with my keyboard as well, and contemplating changing the keyboard or the entire upper case. Did you buy one off ebay? And how long has it been working for you?