I have a 7000 series 42mm apple watch and the battery recently pillowed-up, so I went and purchased a replacement battery from iFixit (Item code: IF308-000-1). I swapped out the battery, but I'm having troubles with charging.

Initially the battery after install was at 27%, so per the instructions I let it drain to 10% and then put it on the charger. It charged up to 100% full overnight and all seemed Ok. I wore the watch the next day and all operations seemed normal, but by the end of the day the battery was down to 27% (normally I would get two days on one charge). I placed it on the charger and this morning it is at 17% and will no longer charge up.

I have tried this battery swap twice - this is my second attempt... both had the same issue and I can't figure out what the heck is wrong.

Ah, crap. I assume that the charge controller is on the mainboard... I wish iFixit would have indicated this detail.

UPDATE: So I decided if it really is 'toast' to do some experimenting... I put the old batter back in and this works properly, so the replacement batteries are the definitely culprit here. Most likely the batter management on these replacements is not compatible, so I'm going to try a 'Frankenstein' and put the battery management controller from my old battery on the new battery to see what happens.

@pbrunnen Hello Peter, I have the same problem with the clock. New battterie and the watch worked wonderfully until it needed to be charged the first time. now it doesn't work anymore, only shows the green "switch icon" when it is on the charger. Can you please give me an update if you were erfolgrech?

So the problem is the battery controller as suspected. It is quite a bit of effort, but I replaced the old controller board from the OE battery onto the replacement lithium cell and the watch has been working well since (last 50 days).

Attempt this at your own risk... With all battery soldering you need to be as quick as possible and you need to use solder that is designed for aluminum/tin that has an appropriate flux. 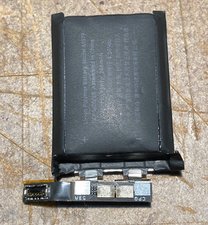