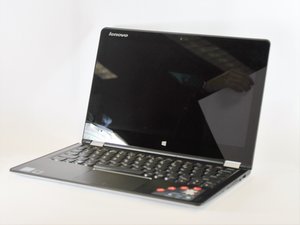 Lenovo's fourth generation Yoga laptop debuted in November 2015. The Yoga 700-11ISK is a hybrid tablet-laptop that features a 4-in-1 design, 8GB of ram, a 2.5 solid state drive, and an Intel® Core™ m7 Processor.

How to recover data from SSD in dead Lenovo Yoga700? Will not power up

Oops! I spilled water over the top of my closed Lenovo Yoga 700-11ISK, opened & dried it off, pressed the power button only to find that the power indicator was on, with the power button LED flickering — it would not turn off with subsequent depressions. It was quite some time before I was able to open the back & disconnect the battery. Leaving the back cover on but unfastened, I placed it in a shallow pan on a bed of rice and covered it with plastic wrap to try to dry whatever water got into it (this worked to revive at least two other cell phones that went swimming). I left it covered on rice for about a month before trying to connect the battery, but it had discharged. Plugged it into the charger — the power indicator came on and flashed off about every 4-5 seconds (dim power button LED — fading barely on/off). It took a charge, but the power indicator stayed on, but could not be turned off. Disconnected the battery and searched the insides for indications of water — also opened the display. I found a small (~1/2”) fuzzy mold-like area on the main board with matching area on back cover. Cleaned the moldy area with isopropyl alcohol using paper towel & stubby parts brush. This was done to no avail — power stays on & cannot be turned off with power button. Nothing else works. I would like to revive this beast, or at least retrieve my SSD contents.

@nobomose Rice does do absolutely NOTHING. It is a waste of time and a waste of good Rice. The month that you waited for some magic did do nothing but got more of your components to corrode and traces to be destroyed. Rice is not a tool, it is an absolute myth. Your prior experience with your phones is not evidence of Rice working but evidence of that they would have come on even if you would not have done anything. Don't Put Your Device in Rice. Here's Why... You will need to clean the board properly . If you do not clean it properly you might as well bin it right away.

Just like any other water damaged device, those are the toughest to fix. First you will have to disassemble your laptop and remove the motherboard. Then you will have clean this with some high-grade isopropyl alcohol (+90%) Once it is properly cleaned, you need to check for obvious damaged components. You could most likely also need some sort of schematic/boardview to diagnose the power on issue. Let us know the exact number on the motherboard so we can try and see if schematics are available. As for the data on your SSD, I suggest that you get an external drive enclosure and use that to access your SSD as an external drive on a different computer.