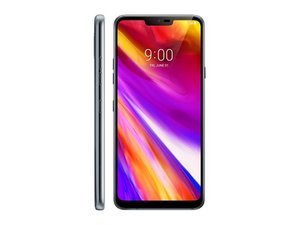 Screen and touch not working!

Hi everybody, sorry for my bad English. I bought on ebay this phone lg g7 thinq . The seller told me, he dropped this phone on the ground and then screen not working. When the phone arrived I see the screen and touch is not broken. The phone work but screen not. I tried to connect on my PC Everything is fine, the PC recognized phone. I opened and I see this connector between USB bord and motherboard is little bit Corrosion. I cleaned it with alcohol and brush. Now I don't now where is the problem, if I buy new screen and then not working. I don't know what to do in this complicated situation. Please help me

It still could be an internally damaged display assembly.

Try shining a torch at an angle close to the screen to check if there is any display visible when the phone is turned on. It will be very faint if it is there so try this in a darkened room to help see it if it is there.

If an image is visible then there is a backlight problem. If there is a display visible then try the touch as you may be able to work out where to touch and check if the screen changes etc.

All it means is that you know that there is less of a problem with the systemboard, especially if both the display and the touch were working, just not the backlighting. You would need to find the schematics of the phone to know which wire in the flex cable to the display was being used to send power to the backlights to prove whether the problem was on the systemboard or in the display.

If there is no display visible then the problem could still be in the display assembly though, as the previous owner did say that it had been dropped.

Whether the screen is visible or not when using a torch as a DIY repair all you can do is temporarily replace the display assembly and check the result.

If the new display assembly works then all is well.

If the new display assembly doesn’t work and if there was no image visible with the old display check if there is an image now with a torch.

If there is then you will have to check the systemboard to see if the backlight power fuse is OK. If there is no image then it is more difficult.

Try to source a replacement display assembly from a supplier that accepts returns, perhaps for only a small restocking fee so as to minimize the cost to you if the display assembly is not the problem.

Wow, I did not expect such a long and comprehensive answer. Thank you very much for your time. Now I tried witch my phone flashlight In dark room an angle close to the screen, but I don't see nothing. Maybe must to open the phone and lighting between display and back light? The seller told me, he dropped this phone on the ground. Display is not a damaged,everything is fine.Back side the phone up on the corner is broken back glass.

The outside of the display assembly may be OK but internally it may be damaged, broken connections etc, and you will not see them and cannot fix them.

Only by replacing the entire display assembly will you know whether the problem is actually in the display or the systemboard. unless you have access to the schematic diagrams for the phone and can test the circuits to find out beforehand.

Where can find this schematic diagrams on internet. Is there specific website witch database diagrams?