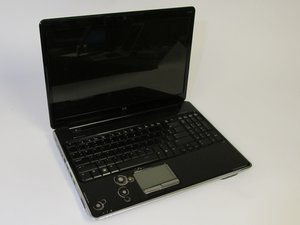 I need some help with my laptop. This is an old laptop that I bought about eight years ago brand-new. It had two video cards, one was basic Intel 3000 the other one was Radeon mobile. About four years ago the Radeon video card burnt. After that I had disabled the driver for the Radeon and was using the Intel 3000 video card for my daily needs and I was using this laptop for traveling only. One year ago I also upgraded to Windows 10 professional and also upgraded to crucial 500 GB SSD. After that the laptop was working like a champ, very fast without any problems. It also has 8 GB RAM.

I usually only use it as a secondary laptop so my usage is not usually more than for 15 or 20 minutes. It rarely ever heats up and has never shut down because of heat.

I used it to normal two nights ago for 10 minutes, It did not heat up or anything. Yesterday when I turned it on this is what happens,

the power light comes on like normal, The charging light next to the Power port remains blue as if the battery is charged, the Wi-Fi button light stays orange, the back light on the keypad stays on. Other than that there is no light on the caps lock button, it does not beep. Does not make any sound. When I first Turn it on the DVD player light comes on for a second and then go silent like a normal startup. This screen remains black and the HP logo does not come. There is no boot screen. There are no error messages on the screen. I can hear the fan running at a normal/slow speed, although when I was doing all this it was once when the fan seem to be running at a higher speed, because the laptop was slightly warmer ( like normal operation).

This is what I have done so far,

1. remove the battery and try to turn it on with the power cable

2. did a hard reset like explained on the HP website including removing the battery and power cable and pressing the on button for 30 seconds.

4. Removing the hard drive connection cable from the motherboard And then connecting it again.

5. checking the voltage of the onboard clock battery (3.2V) And even swapping it out with a new one

6. Connecting the laptop to my TV display with the HDMI cable and it continues to show no signal.

I'm just trying to figure out if the motherboard has died or what. It is not even giving an error message, does not even boot. I cannot go into boot to change anything. To me it does not seem to be a RAM or SSD issue. In some of the HP laptops apparently the caps lock light blinks a few times but it does not happen with my laptop. It only happened once when I had moved both RAM from the motherboard. When I put them back the caps like light did not blink.

I would really appreciate if you can suggest anything.

Thank you very much for your help