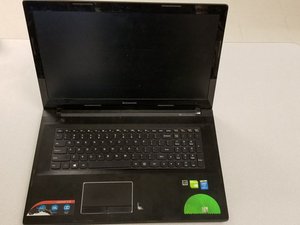 Runs great as long as it isn't turned off or unplugged

My laptop runs great as long as it is plugged in, and left on or in sleep mode. If it gets turned off or unplugged it will not turn back on normally. It used to take 15 minutes up to few hours before the Lenovo logo came on, now it’s stuck on black screen for two days. There is a single BIOS beep when plugged/unplugged while the battery is in. From what I googled, it seems to signal normal booting. The light indicating that it is turned on lights up and is solid (not blinking). The screen is black and the Caps/NumLock light will not turn on. I can hear the fan running, CD-ROM ejects etc. I tried all the usual tricks and nothing. Before, if left plugged in and “on”, it eventually would boot up on it’s own, hours later. But now it’s been too long. What does this mean? Possible to resurrect?

Besides the myriad battery/motherboard/RAM/hardware solutions on the Internet, one suspicion I have is the computer being unable to find/load Windows. The reason I think so is because before the issue emerged months ago, I remember playing with tweakings and cleaning software that also targeted system files, especially the bloated Windows updates junk, among others. Could this be a factor? If so, is there a fix under the circumstance of laptop not booting? Thanks.

Try taking out the internal hard disk and observe the results.

Consider updating the laptop bios to the latest revision if you are in windows.

Please perform this if you feel your computer is STABLE!