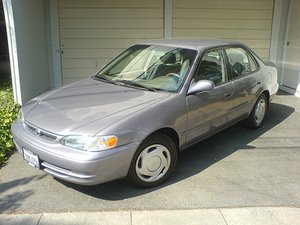 If your engine is bogging down and you are still getting enough cool air from the A/Con system, then the A/C system will have a full charge of gas and will not need servicing.

If this is the case, run the engine, with A/C on, at night and open the hood. As the A/C runs via both belt (for the compressor) and electrical (for the car system), you may see that all or some (even one) of the spark plug leads are flashing.

This means that the insulation around the lead has broken down, and the electricity required to run the total power needs of the car with the A/C on will be low. If this is the case, replace the faulty lead (I would recommend replacing all), as this will allow the electrics to run at full capacity.

Another way to test the electrics is to remove the lead from each plug one at a time (with insulated pliers lest you get an electric shock), and hold the lead very close to the body of the engine. If the lead is working, there will be an electric discharge between the lead and the motor (this is not dangerous). If when removing the lead, the engine does not bog down, then the spark plug is faulty. Remember that the spark plug is only used for firing the petrol (gas) to pump the cylinders, and the electrical signal comes from the alternator, via the coil and lead to the spark plug.

A vehicle electrical system works by the battery exciting the alternator, which then runs the electrical power to the coil and so on. If either the battery or the alternator are faulty, the vehicle will be running under power from an electrical point of view, so anything that requires high levels of electricity (such as the A/C) will bog the engine down. The engine bogging down is a good signal to say that the alternator is working, as it tries to ramp up the current. If there is a high drain electrical fault (i.e. leads, coil, etc), the engine will bog down more than usual, and the interior lights will dim, as well as the headlights, as the alternator tries to source more current.

If the fault is due to a loose compressor belt, the engine would not bog down, and the A/C would not get fully cool, or you could hear a squealing sound, which is the belt slipping.

If none of the above are the problem, then look at the top of the A/C gas cylinder (next to the compressor - usually silver) and there will be a yellow glass bubble. If this has any air in it (it will look like a bubble), then the A/C unit needs a gas charge.

This will also cause the engine to bog, as the alternator is trying to run a low pressure system (due to low refridgerant) at it's normal gas pressure, therefore requiring more current.

If this is the case, there would also be a slight leak in the system, as refrigerated A/C systems are closed loop systems, and do not lose gas (this is why your fridge will still work well after 20 years).

Very good answer!! I am going to try all of these suggestions and as a Mechanical Engineer they are all valid problems that will cause power loss. I am betting it will be the spark leads arcing or coil pack problems. If I manually change gears there is no problem so that eliminates the torque converter or gearbox. I will check the AC window and see if the gas is low, but it is cooling nicely so I am not hopeful of this being the problem. I am going to replace the Oxygen sensor as spasmodic acceleration is there all the time. I will let you know how I go. Thanks for the tips.

Is your A/C cooling in the car effective?

self repair from this point on is unlikely

Had the same problem on my 2002 corolla it's the sparks or/and the coils.

I recommend replacing all the sparks first sick there only in the 3-8 dollar price range.

then the coils they are like 107 dollars a piece.

have you cleaned the intake manifold? Just wear gloves, mask and protective eye wear, take off the large hose, and wipe the inside with carb cleaner, performing the process several times, till clean.

Could be something simple as dirt on air sensor, take out air filter, and the box it sits in, you will see i little sensor inside, if there is dirt and plague on it, clean with brake cleaner.

I had that problem when I installed an aftermarket Chinese POS coil on plug module for cylinder 2. on my 02 Camry when the original coil on plug failed for that cylinder. Big mistake!!!! Car ended up cutting off at highway speeds. Always use Denso electronic OEM parts for Toyotas, as these cars don't take well to parts other than OEM.