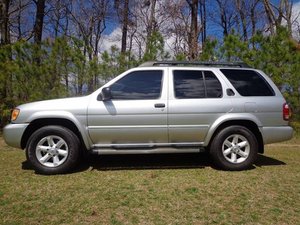 The Nissan Pathfinder is a mid-size crossover SUV manufactured by Nissan Motors since 1985, derived from Nissan's compact pickup truck platform.

im thinking on buying a pathfinder but it can be started and runs great . but after it gets truned off it want start back up acts like its out of gas till it sets for a while then it starts and run like a charm. my friend that i am buying it from just had the timing belt and distebter replaced with new ones. he been told that the fuel rod is geting hot and its causing the eng. to vaper lock. i did look at the fuel rod and noised there is not a heat shild between the motor and fuel rod. what chould be causing this if it not the fuel rod .its acting the same way .older vic. did when fuel pump was going out .drive a car for a while then the car stop running and let it set for 30 mint. and it whould start back up and run fine. before everthing got cumpterrize. and was not hard to work on