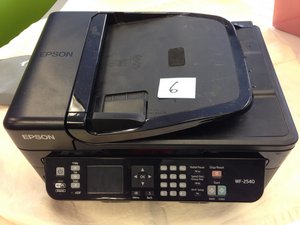 The Epson WF-2540 is an all-in-one color inkjet printer. It features a 2.5-inch LCD touchscreen and four individual ink cartridges.

Hello everyone, I have a printer (actually two now) which shows me paper jam and now I will explain you more. I have two same printers wf 2510, the second bought because the first doesn't recognize the pc (or vice versa) anymore, so I bought this second one second hand which has paper jam problem but I thought that wasn't related to any hardware problem. Thus, I replaced the main board taking it from the second printer and place it in the first one but as I turn it on it shows me the same paper jam error I got from the second I had bought. Guys you can believe me that the other one (first) is like new and doesn't have any other problem except this one I mentioned above. So now I wonder if there is a so called hardware failure problem and I would ask how I can solve such problem. Thank you in advance!