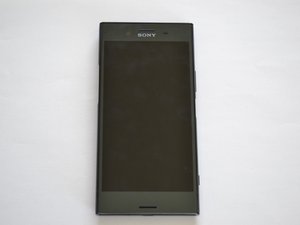 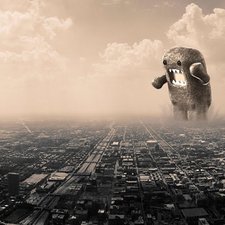 My dad's XZ Premium 'stopped working' like two months ago, he took it to a random repair shop who opened it and poked a lot of components so there's no warranty anymore they thought it was a bad battery for some reason.

I found the phone still worked but the screen appeared to be broken so I thought i'd fix it for fathers day with a replacement screen.

I installed the replacement screen but it still wouldn't work, then I found that if I boot it or make a screenshot even though I don't see anything the screen does in fact show an EXTREMELY low change in brightness. It's barely visible at all.

So I supposed it wasthe backlight that doesn't work, so I've read about backlight fuse/jumper repairs on the motherboard. I check the backlight fuse with a multimeter, and it appears to work fine. Then I want to proceed to check the display fuse, but I can't seem to find it given it is marked with the L like it was on the xperia z5 i've seen in video tutorials. 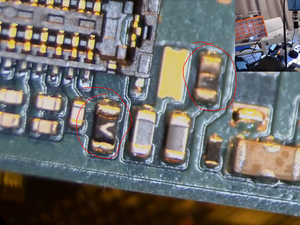 Hopefully I can find it and find that the fuse needs fixing otherwise I won't have a clue what the issue is anymore... ;/ If someone has other suggestions, that would also be highly appreciated.

Thanks to Smartfonefix I think I found the issue, visually they already look in bad shape not exactly sure what to test on with these I tried a bit with the diode mode but the numbers don’t say much to me (I do have a working XZ Premium myself to compare values to but I don’t really want to void the warranty on that) though I don’t get a beep on the coil and diode. I’ll try to find out how to confirm it’s either one of these or both but even if it is one I doubt it’s a diy fix. (i think it’s the correct ones that are in the top left/middle-left. 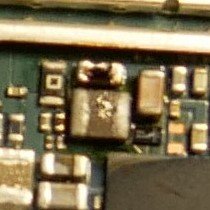 Having same problem with a z5 I tested new screen before fitting. And Once new screen was fitted! I have No Lcd or back light. Second screen was the same. What causes this problem? Battery still conected? A friend had same problem after screen replacement.

You can check out this video for the z5

Hi Mark. I have the exact problem. But I'm in South Africa. Do you know anyone who could help me? I have no idea where I'm going to find parts. Are both these parts reristors?

What is the name of the defective part?

Hi, there is a capacitor who got short and then coil got burned and diode as well - all this parts you can get from iPhone 6s mainboard - I fixed this today - worked 100% - just put diode in correct direction - all parts ( these 3 diode, coil, capacitor ) have to be replaced. Good luck.

If you have measured the ‘V’ fuse and there is continuity, the next things to check are the capacitor, diode and coil on the backlight line. The backlight capacitor is the first one just above pin number 1, and then the coil and boost diode are underneath the EMI shields. They are located immediately next to the PMIC. Follow the ‘V’ to the left and it is not under the first shield but the second one towards the top side of the board. Unfortunately there are no schematics available for this phone, however we have repaired many in the past :)

Hey I've actually wanted to send the phone over to you guys as I found your website and the listing of this specific repair, the price was fair but shipping just seemed a bit expensive unfortunately. even more than the repair cost. Thanks a lot for your reply though, i'll give it a shot again it's just an annoying repair as a rookie :l If I don't figure it out I might send it in anyways cheers.

Hi, there is a capacitor who got short and then coil got burned and diode as well - all this parts you can get from iPhone 6s mainboard - I fixed this today - worked 100% - just put diode in correct direction - all parts ( these 3 diode, coil, capacitor ) have to be replaced. Good luck.

Can you give us some more info about the parts changed or if they had some numbers on it or pictures. please. But you allready assembled the unit so we have no chance İ guess. Anyway you saved your phone, hope you enjoy it.

Thanks very much for giving details. İ am going to tell my repair shop to where to look for burned parts, hope they can fix it, because the phone sitting there last six months or more! İ am so grateful.

Hey guys, can you give us some more specs, changed parts, pictures,etc, the phone useless, sitting in repair shop last 6 months as unabled repair! Thanks.