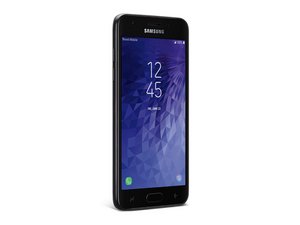 Galaxy J3 2016 appears to be dead, but makes charging sound

He said that it had a problem. So my father gave it to me to take a look, and the phone appeared to be dead. No signs of life whatsoever. But when i plugged it to my charger, the phone make the classic Samsung charging sound! I left it to charge for hours and came back, but it was still dead. My PC recognizes it, and by right clicking on it, i can see that the battery is 100% charged, the firmware version, and the serial number. Kies 3 recognizes it too, but it claims that the phone is locked. The phone is still looking like it's dead. No matter what i try. (Yes i tried to boot in recovery and download mode, nothing)

I also noticed that when i hold the home and power buttons, i can hear the "screenshot sound".

It's looking more and more like a dead screen, but shouldnt the touch buttons light up in that case?

Shouldn't the phone vibrate on boot?

Are there any indications of a dead screen? If you hold a flashlight to it, can you see the screen at all?

If samsung kies recognizes that it's locked, can you reset it too?

Thanks for the reply!

No, the screen is totally dead. But it's not only the screen, the touch buttons on the bottom don't light up either. Holding the power button wont make the phone vibrate as it normally does when it powers on.

Emergency recovery in Kies asks me for the "Emergency recovery code", but the person that owned it claims that he did not set up a code. Firmware Upgrade in Kies throws an error "This device does not support initialization".

@gamwtnsammy from your description it sounds like a bad display. Challenge will be to determine if it is the actual display or if it is an error on the circuit board. That can only be determined once you check it out. I'd start with a new display and while the phone is dismantled check the board for missing or damaged components.

If it doesn't work you can't do a factory reset unless remotely.