MBP not powering on

I was hoping you could give me some advice?

I did something very very stupid to my MacBook Pro 2011. My gfx card on the original logic board had decided to no longer work, later found this was a design fault, anyway ask I work this computers I felt confident enough to take on the take of replacing the logic board myself. I changed the logic board and powered up the MBP. The logic board I had purchased was working and I was very happy, for about a week, then it wend back to the same problem.

Not wanting to have to do this process on a weekly basis, I did some research and found that others who had the same issue said you can upgrade the logic board to a mid 2012 logic board.

After scouting the internet for more information and gathered enough information to upgrade the logic board. I went ahead and ordered the board. all excited on its arrival I went to fit the board with all the little bits than go with it.

I booted the MBP and it works and I was ecstatically happy! So while the laptop was booting up I was impatient to wait for the laptop to finish booting to then power it down. I had the little metal guard left to screw in, only dropped the screw on the logic board and sparks came out and everything went dead. (I know, I'm not feeling proud at the moment) I tried to revive the laptop with no success and came to the conclusion that I have fried the logic board.

So I ended up buying another 2012 logic board (arrived today) I have very carefully swapped out the logic boards (made no errors this time) and went to turn on the MBP and noting not response, so I plugged in the MagSafe power adapter, the little green light comes on, I go to power the MBP and still not sign of life. I disconnected the power and then removed the battery, reconnected it and plugged in the MagSafe cable back in, the green light comes on but again I have no response. I pressed the battery indicator on the side and that isn't responding either.

Is it possible that the battery could be fried or the logic board is faulty?

I bought the logic board for this site and it has the QA sticker on it.

I would be grateful for any trouble shooting ideas

Thanks for responding. I have included a photo of my logic board 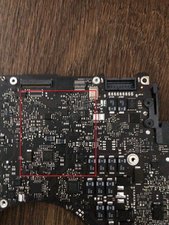 With in the red square is roughly where I dropped the screw.

But also my new logic board isn't working either. 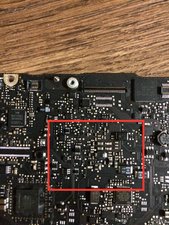 Well your board is not necessarily fried. They are very fixable. Send me a pic of where the screw fell so I can determine where the voltage went.

I have put a photo in the original feed. I couldn't figure out how to paste one in here.

Just had a thought, could it be the battery thats been damaged?

Could be. Post a pic of where the screw fell.

I have added the photo in at the bottom of the original feed.

Most probably your MagSafe board is dead. to remove it you must remove the logic board then unplug it from the logic board. They are very cheap, usually about 10 bucks on eBay. Hope that helped, looks like you spent a lot of money on logic boards.

Its my old MacBook that I promised my niece, when I would upgrade to a newer MBP she could have my old one, its also had RAM and an SSD upgrade.

On both logic boards, when I plug the MagSafe the green light comes on so that means power is going to the logic board?

Also I noticed the battery indicator no longer lights up. (even when the MagSafe is connected.)

I thought about the MagSafe binning the issue. but the light comes on green. Its not blinking or showing amber.

Seriously, this is happening to me at the same time. I have swapped ssd's, changed ram slots, I've done everything. however, i know that an smc reset will help. hold shift, control, option and the power button, then press the power button again. i hope this will help. it worked for me the first time, but the second time it didn't.

I replace the MagSafe board and still not sign of life. The I tried with the battery disconnected (as above) with no joy. I also tried on the off chance, hold shift, control, option and the power button, then press the power button again. but that also made no change. The last thing that is left to replace it the battery without a guarantee of it working. I could on the off chance try the only logic board that I dropped the screw on? what to do you think. I won't hurt...

So the great news is I have managed to start up the laptop, so happy, (unplug the safemag from the MBP, hold down the power and connect the power while still holding the power button, it will boot after 10 sec) BUT there is always a but... my keyboard and mouse are not responding. This happens when the os has booted up. If I boot up I can hold down cmd + R and allows me to reinstall. this is my next job if I can get the keyboard & track pad to function... any idea? ☺️