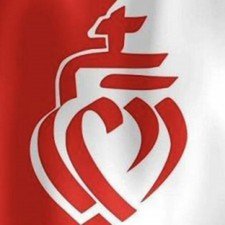 How remove horizontal line(s) at bottom, after replacing screen?

Just replaced the screen/display-assembly on my iPhone 5s, using these iFixit guides:

Thankfully, it powers up; the home-button works; and the display (*mostly*) works, also, but with this one, minor flaw:

At the bottom of the screen, there are several lines that show up in the "dock," towards the very, very bottom, (closest to the home-button).

It is strange!... I tried disconnecting and then reconnecting the LCD (and 2 other nearby) cables. No luck: same problem still remains.

When it powers on, (the apple logo seen on the screen), these horizontal lines are (strangely) only about the width of the home button — right above the home button, furthermore — and, they are white.

After the power-on cycle is completed, the lines become black, and spread horizontally across the entire screen — but, only a few of them, all towards the bottom.

On the home screen, there appears to be only two black lines. If I open an app — any app — then there are three. (Weird!)... — Or, if the home-screen seems to only have two, then it might be said that the third one is 'partially' or 'faintly' there. However, it becomes more 'clear,' in opening any app, (if that makes sense).

I can live with this — it's not "life or death." But, if there's something obvious that I am missing, then it'd be nice to know something else to try.

Thus, any help is much appreciated. Thanks, in advance.

I would see how the screen looks before clicking it into the housing of the phone just in case those lines are caused by anything putting pressure on the rear of the screen. If that doesn't help anything, try a new screen, it could just be that you have done everything correctly but unfortunately had a faulty part.

However, I wonder if I might have already tried it, (somewhat): for, I had left the housing separate from the screen, powered it on (all cables connected, obviously); but then, (with the phone not yet closed again), the problem still showed up.

On the other hand: I wonder if maybe I connected those home-button screws a little bit too tightly?... — or, if maybe the parts aren't seated properly... (e.g.) —

Could that be the cause?...

I'll try taking another look later on, if nobody suggests anything else in the meantime, after awhile.

P.S. Just edited original posting, to link to 3 photos, (if interested or helpful or relevant):

The screen is faulty. The only way you are going to get it working again is either replace the screen or try straightening the display ribbon cables without damaging it.

—> Not quite sure what I'd be attempting to try straightening, on the cables. Anything special, here?

There appears to be a "seam" or some sort of "splice" in the cable, (with even a little bit of copper still exposed, along with a small bit of overhanging, black electrical tape!... seems cheaply made, perhaps?...)

I'll eventually try it; any pointers or tips about this, much appreciated.

Just the black part of the screen ribbon cables only where it usually gets bent / folded.

Quick follow-up: the seller won't respond to me (for a refund/replacement part), because too much time has passed (since April purchase on eBay) and they can't find any record on their eBay account, anymore... (Weird!?)

@Ben: I reopened it and tried straightening the display ribbon cables; result = no success.

The problem is not so bad that I can't live with it. If I decide to shell out another $20 bucks, (and another hour of time to do the repair), I might later see if a new part fixes the problem. If so, I'll update this later, for the sake of posterity — if it should help anyone in the future.