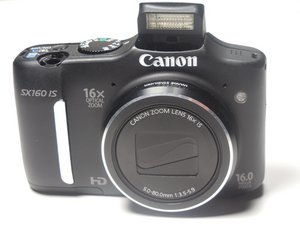 The Canon PowerShot SX160 IS is a 16.0 megapixel digital camera with a 16x wide-angle optical image zoom and a 3.0 inch LCD.

My lens stopped working, how do I fix it?

its taken small bumps from time to time with no issue, i really do try to take care of it but it isnt easy when your jerk dogs do what they can to get to what they want to bump it.

it took a small drop today, but seemed fine, i turned it on a few hours later, fine, i even took a nice picture.

after left alone on a shelf (where my dogs cant get it) i picked it up an hour later to take another picture, the problem? the lens opened about halfway then stopped.

i turned it on again, it opened to 8X zoom then another lens error.

the lens appears not to be just a little stuck, its COMPLETELY stuck.

i cant move it whatsoever and im actually thinking of opening it to take a look.

okay, i got my lens put back in the camera, it opens about halfway before stopping but at least its able to move even partially.

@magicalpamda stuck lenses are the most common error and failure on digital cameras. Start off by using the suggestions from this site. Sometimes those work but most of the time only a replacement of the lens will repair it permanently. This video also not the best, will at least give you an idea how to get to the lens.