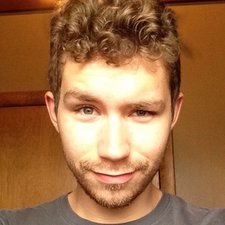 MacBook Core Duo not working properly after internals were replaced

I just finished doing some major computer repairs on a 2.0GHz MacBook Core Duo. About a week or two ago, my mother was using her MacBook while drinking coffee and ended up spilling a significant amount of it onto the top case of the open MacBook. She called me about it and I was able to obtain the MacBook that night to do some heavy duty cleaning.

I took the computer apart entirely and cleaned up all the coffee I could using 91% isopropyl alcohol. After reassembly, I tried to power it on, but it was no good. The MagSafe light would not illuminate when any power adapter was connected and the logic smelled a bit like burned plastic, so I determined it was a dead.

I purchased a used, working logic board on eBay a few days ago and transplanted that into a separate MacBook Core Duo that I obtained from my brother using the iFixIt repair guides. His logic board had died of natural causes and none of the internals had ever come into contact with fluids, so they were fully operational. The only internal component I used from the MacBook that had coffee spilled on it was the hard drive, but it was not damaged and was tested in an external enclosure, so it too was operational.

I finished reinstalling all the internal components today connected the MagSafe adapter. The light on the adapter came on this time and the battery indicator lights are blinking and rising, so the logic board is receiving power. Upon power up, the optical drive sounded, but it just kept cycling. I didn't hear the fans power up and all is silent, but the cycling optical drive. So I'm not sure what problem there may be now. Could someone provide some insight given the symptoms I've described? Let me know if you need to know more. Thank you so much, indispensable iFixIt community!

After trying all the suggestions that rdklinc provided, I compiled a log of my results in order to see if this issue could be further diagnosed. Here it is:

When powered on, the MacBook's optical drive and hard drive fire up, but the sleep light comes on immediately and stays steadily lit. No start up sound is heard and the display remains black.

The display I reinstalled is fully functional and there is no faint image on the screen. I have also connected a second fully functional display (see photo below) from another MacBook and still nothing comes up. This may rule out a bad display or inverter cable. 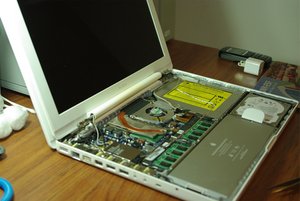 When resetting PMU/SMC, the sleep light would flicker, but no tone was heard after any reconfiguration.

I reset the PRAM, but nothing happened.

Initially one RAM card seemed improperly seated, but after removing both RAM cards, switching up the configuration, using different cards, and reinstalling the cards properly, nothing happened.

I opened the MacBook again, disconnected all internal cables and reconnected them all, making sure they were properly and securely seated.

I disconnected the hard drive cable and attempted to start up the MacBook, but the sleep light did not illuminate and the optical drive started cycling again.

I got an email back from the Beta Macs company and a phone call from the rep I was emailing with about the logic board yesterday. They said they tested the board in a different machine and that it worked fine for them. I don't know if something they're doing is different from what I did, but the rep called me to tell me that my issues may be from improperly installing the temp sensors and not using thermal paste during reassembly. I'm certain I did both properly with the aid of iFixIt guides. What do you guys think, could it, in fact, be something on my end? I mean, I've tried all the things you suggested to get it working. Beta Macs has fully refunded me the cost of the logic board and the shipping. I've been thinking about ordering the only 1.83GHz 4-wall logic board that iFixIt has in stock, despite it being $100 more than the previous board that I purchased. I feel like there is a higher degree of functional certainty from iFixIt. What would you guys suggest? Once again, thanks so much for your help! You guys have been incredible.

+ for a well written question and trouble-shooting.

Well, it sounds like the power subsystem is working, so that's a good start. Do you know for sure the screen is good? First I'd try resetting the PMU/SMC by holding down the power button for 10 seconds while the power is off and the machine is connected to AC power. Hopefully you'll see the sleep light flicker and hear a tone...sometimes resetting the PMU can kick a machine out of the mode you are experiencing. If that doesn't do it, try resetting the PRAM.

Next, I'd reseat the RAM, and try one slot at a time with the other empty, in order to test for a bad slot. Reset the PMU and PRAM every time you change the RAM configuration, just to be sure.

Make sure to keep the topcase off while you do all this...there's no reason to have the machine 100% together while it's still having problems and you may have to go back in. I'd also keep the battery out to avoid complications.

If none of this helps, I'd revisit the iFixit guide and make sure all connections are fully seated. Make sure you don't have a faint image on the screen, indicating you may have a bad screen or an inverter cable issue. You can try connecting to an external display, and if that works, you know there's something wrong with the internal display components, and if it doesn't work, you know it's something other than that. You can try disconnecting the optical drive cable...I've seen bad cables/drives hang a system, so it's worth trying to power up with it disconnected just to make sure that's not the problem. You can try powering on without the hard drive as well -- basically, it can never hurt to remove all components in order to reduce the number of elements that could possibly be the problem, and that takes you closer to the cause.

Beyond that, I'd question the source of the logic board. Often people sell parts as good when they actually haven't tested them. I'd return it if necessary, and try another.

Anyway, I hope that helps, and let us know how it goes!

Thank you for your suggestions, rdklinc. I've performed each of them and compiled a log of my results to see if you or any other helpful soul might be able to home in on the issue further. I've added it to my original post as an "update" rather than here, due to length.

It's very odd there was no tone after resetting the PMU...it should always produce a tone, so this indicates that sound on the board is either not working, or the sound cabling/speakers are not working. When testing the RAM, did you try one slot filled with the other empty, and vice versa (in order to test for a bad slot)? You might try connecting to an external display...if that works, you know the problem is with the screen cabling/hardware. Bad topcases occasionally force sleep mode on the machine, as it sounds like may be happening...you may want to remove the topcase entirely and jump the power to see if the machine acts any different that way (see one of my recent responses to another question for instructions on how to do that). Beyond that, you may just have a bad board, and I'd explore the option of returning it to the seller.

Thanks again, rdklinc! I did try to be as thorough as possible to accurately diagnose the problem. I agree that the absence of a tone after resetting the PMU was odd too. I double checked the RAM again this morning trying one in either slot, but nothing still. I contacted the seller, Beta Macs, yesterday afternoon, and they are having me send the board back for testing, repair, and possibly an exchange. I was happy to be dealing with a legitimate company and not a con artist. They emailed me a FedEx label and I sent it out this afternoon. It has been fun and a great learning experience to teardown two MacBooks and reassemble them a bunch of times. Your help was very much appreciated! I'll keep you posted on how my second installation and reassembly attempt goes when I get the repaired logic board back or receive a replacement.

Glad to hear they are accepting a return! Hopefully soon you'll reap the benefit of all this testing you are doing and have a working machine! :-)

Anyway, good luck, and I hope you'll continue to be active on the Answers page -- it's refreshing to see a problem written out in such detail, and not have to play a guessing game or ask a million basic questions.

I have 2006 core duo I just bought from a gal very cheap. She was told by Apple genius that logic board was faulty and had to be replaced. I removed the board and gave it a good cleaning and inspection with magnifying glass. I didn't see any hot spots, ie discolored solder. So I put back in and still had same problems as you until I played with switching ram around. I found I have a bad ram slot but a 1 gb stick works great in slot 1. Now it boots and runs fine as long as I leave slot 0 empty. Good luck

Okay I also bought a newer MacBook 5,2 made in early 2009 I got a good deal because the keyboard didn't function correctly. I ordered a used replacement version 3 top case for that one and all has worked perfect since. Just be sure you get the correct version.

Yeah, I've heard that that can happen sometimes. It's sad that you have to deal with only one RAM slot, but that's better than no Mac. :D

I was able to figure out the issue with mine a while back, it was bad RAM. It's working well now, except I haven't gotten the built-in keyboard or trackpad to respond. I've been trying to work out whether it's a driver issue or what, but we'll see I guess.

Your problem is a either a dud logic board, in which case i recommend domkuk, and/or you need to replace your top keyboard/trackpad panel (costs around $50).

If you have the top case off, take the hard drive cable off and make sue you are careful not to break small cable that hooks to sleep light. it has small flap that releases the cable. Take out the two screws and then take black tape and check to see if solder joints on small board corroided. Replace cable if necessary. Allen Gifstad, esu10. org