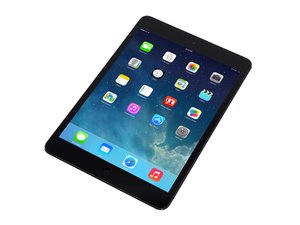 I'm trying to diagnose a iPad mini 2. My son brought me his iPad with the screen showing lots of multicolored vertical lines. I could still see the background and apps and could still use the iPad normally despite difficulty seeing full detail because of the lines. He said maybe he had dropped it but there was no obvious damage to the outside.

My first guess was a dislodged display connector so I tried tapping the back and corners of the case. This didn't seem to do anything. I'm a glutton for punishment so next I decided to visually check the connectors and disassembled the screen to see if something came loose. After re-fitting the cables though the iPad appears to behave the same way. No improvement and nothing obviously loose or damaged.

Now I'm wondering is this a failing LCD screen or some other problem? This doesn't seem like the usual "white screen of death". I'd love any help or ideas!

I had this happen when repairing my digitizer I damaged the LED screen causing the lines you describe it sounds exactly the same I purchased a new screen but be careful if doing it yourself I have broke a screen & a digitizer trying to replace them, they are tricky lol

I'm going to give this a try and report back. Thanks!

I haven't closed it up yet but it looks like a LCD replacement was the thing. I happen to have a 2nd mini2 that went on the fritz a few days after the 1st one and did a LCD swap between them. Plugged in the new LCD, connected the battery and it booted right up with a press of the home button!

Now I just have to scrub off the old adhesive and try to close things up without breaking anything! Thanks for the suggestions Ade!

Be so careful handling the components and closing things back up. About a month after I finished closing this mini it started glitching, getting phantom touches and ignoring touches. Still works but with a side of frustration!

i had same problemrestore ipad, upgrade ipad, open and check inside,nothing fixed my problem,i order a NEW OEM LCD Assembly on Ebay and go back like NEW....Ipad Mini 3.....LCD Garbage MADE IN CHINA got lines without hitting or dropped to the floor....China is Bad Quality on parts.

I have the same thing but instead of the screen going completely white it goes completely black after about 1 min of having it open. when i first open it in the morning when i wake up, it's fine for about 2 seconds. then it goes to mild stripes, I can still read what's going on and see what i'm doing but nor for long.n 5 seconds after the bad stripes happen - again, entirely a visual glitch, can still do things, just cant tell what. 1 minute or less after that happens it goes black. it started 2 yrs back when i somehow cracked my screen, not too badly. but it only got this bad about 4 days ago. before then, it only occasionally did the mild stripes, I'm talking about once a month here. 2 weeks ago i noticed a weird glitch on the very edge of the right hand side of the screen and that's when it started getting worse.

After reading comments and what you have done so far I'd say it is most likely a hardware issue. Try a new LCD first.

I'm considering opening up my other son's iPad mini 2 so I can use his screen as a test first. But yeah, this is starting to sound like it (hopefully) is just a bad LCD. That would be about what I should expect for a used iPad from eBay!

connect it to a computer and wait for few seconds, you should see the notification on the computer, if it doesn't than, disconnect the battery from the ipad and reconnect it.

I tried connecting to iTunes and it shows up normal though it's locked and has find my iPad turned on.

I also tried disconnecting the battery connector and putting everything back. I was able to boot it normally. It woke and the screen lit up for about 10-20 seconds but was only white. No apple logo or anything else.

I connected it to iTunes and it shows up fine. Clearly it's running despite the white screen.

Apple recommends a restore but I'm hesitant to wipe things out (kids Minecraft maps, etc). Can this be a software thing?

No issues with the back light. I know that for sure. I just don't know if this is a bad LCD or some other component acting up. Any help?

I have this on half my screen, I keep reading restore, is that same as reset??