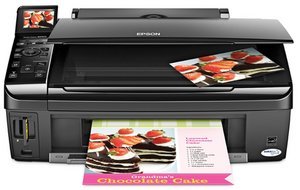 The Epson Stylus NX415 is a color inkjet printer. The printer uses T088/69/68 ink cartridges, which use a wetness sensor behind the visible primary chip.

This is an old question, but I have some working information since I had one years ago. These NX415 printers are one of the first dual chip wetness sensor printers with the 88/69/68 series carts that don’t like to come out. These carts are a nightmare for refillers and end users who refill their own carts.

These carts are built in such a way where you have the primary chip (which has been used for years) and a wetness sensor behind it. Once the sensor goes dry at ~25%, the chip goes into permanent read only mode and the only way out being a new chip. The modern Epson black carts no longer use this wetness sensor but the read only lockout is still present.

The other gotcha with these modern Epson printers is the wetness sensor carts DO NOT LIKE to be removed, especially at the point the ink level is reported to be low (~25%) or empty. If you remove these carts before they go to 0%, they tend to be permanently killed and again, need a new chip much like if you refill a locked out cart. Epson even warns end users not to remove these things until you are going to replace it. This is an old post, but it also describes the problem: Freedom to print 69/68 teardown.

It sounds like you removed a low cartridge and replaced it not knowing about these problem that affects these newer Epson printers. I’m suspecting the cartridge is ruined and needs a new chip or a whole new cart as a replacement. Of course, it has to be one that Epson hasn't sued to block from being imported. The NX415 is a grey cart printer, so there are no firmware blocks that are “security” updates.