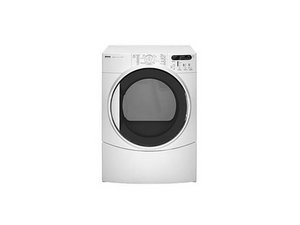 E1 code on he3 dryer

Control panel went out replaced started getting E1 changed thermistor still E 1 tech support says bad motor changed that still E1 all new sensors still E1. Got too much in it now to chunk. Anybody help 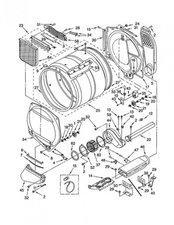 You ever get this figured out. I'm having the same issue

After all your work is complete, whatever you have done and whatever the problem may be, perform a factory rebooting. I don't know but it may be similar to a vehicles check engine light in that it comes on, you and your mechanic fix the car and all its problems but the check engine light may stay on UNTIL it gets reset. Could be a similar situation w/the dryer.

Can we get a parts list to go along with the schmatic?

Sorry it's a thermister code. Check your wiring continuity to and from it. Could be a bad part.

replaced my thermistor 2 times- still have e 1 code. any ideas?

I have the same problem after changing my electronic control board that I purchased from amazon. initial problem the unit would not heat up no flame or igniter glowing. after checking all items like thermal fuse and thermistor, gas coils i found heater relay not closing on electronic control. numbers all match up thinking my new electronic control may be bad.

Check the heat exhaust for lint clogs and the outdoor lint screen on the side of the house or what have you. Mine hadn’t been unclogged when I replaced the thermistor and burned out the new one. Use a vacuum and screw driver or hanger to get everything unclogged. Just a warning, be prepared for an animal to be caught in the outside part of the vent 0.o

I have a Kenmore HE3 and I have changed the fuse, thermister and 2 other parts and im still getting a P22 code after running for about 60secs?