Strange permanent border around the screen

Hi All! I've come across a large quantity of 2011 11" MacBooks Airs, and most of them have a strange line on either the right or the left side (see picture). It's actually not really a line in the usual sense, but more a gap on the screen. It's as if the actual screen display is being squashed to a smaller part of the screen than the whole screen. I have several that literally have a 1" border all the way around the screen, and the display is squashed into a box in the center (I supposed this could be called a 10" Air? :-)

Anyway, I don't anticipate this is repairable, but I wanted to run it by everyone and see what you know about this kind of screen damage. I can't imagine what would cause it, and it's especially strange that I would get dozens of them all with the same kind of problem. To me it looks like a manufacturing defect, but in that case why wouldn't the owner not take them all back to Apple for replacement?

Curious to see what you think. 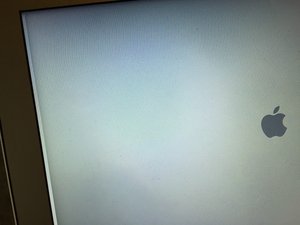 The LCD panel (not the whole top lid) has been replaced before, and the first few backlight sheets behind the screen have not been repositioned properly. You can see the curve of the backlight sheet in the top left of your picture.

The only way to resolve this would be to remove the silver bezel, LCD and reposition the backlight sheets.

I haven't seen this kind of thing for years. What happens when you hook them up to an external monitor?

Video output looks perfect. Seems to be screen damage of some sort, and not the GPU. When I change the screen resolution, the border does not move with the resolution change. All of them have dents and scrapes, so maybe if the screen casing gets whacked pretty hard from behind this kind of thing occurs? But again, very strange that there would be so many of them.

I know this is simplistic but hook up a known good display unit and see if it works. Take a look at this rather good tube teardown of the display. This may show you if this is a backlight issue: https://www.youtube.com/watch?v=eHNtnvzf...

That's a good idea, and definitely the next logical step. Unfortunately I may be too lazy to open up a screen assembly and try it, but we'll see. :-) Thanks!