Why is my display not fully waking from sleep?

This problem is well documented in blogs (not by Apple), however over the years I have not found a solution. I will attempt to accurately describe the problem.

I never let my 2009 27" iMac (2.8 GHz Core i7) go to sleep, only the display is set to sleep after a period of time. It does not matter how long the display waits before going to sleep. It does not matter how hot (or cool) the iMac is, nor does it matter if anything is plugged into any ports or not. This issue has also existed through at least four versions of OS X (Lion, Mountain Lion, Mavericks, and now Yosemite). I have an external display hooked up via Mini DisplayPort cable (the monitor has only a DisplayPort input) and it too acts the exact same way as the built in iMac display, meaning it will not fully wake either (more accurately, it will not show any video other than the pointer). 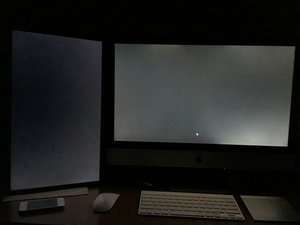 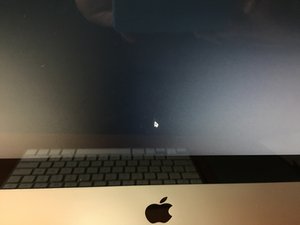 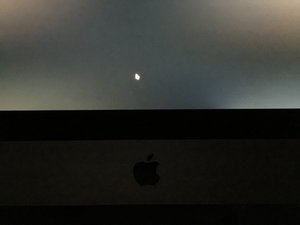 When I return to my iMac, I touch my trackpad (or anything else that wakes the display) and the backlight will turn on and the external monitor will also wake (as seen in the first photo) and most of the time even the pointer arrow will be visible (as seen in the second and third photo, it's hard to focus on anything with little light). The pointer arrow even moves across both displays fine. But every other pixel will be black with just the backlight leaking through the LCD panel. No key command or combinations of keys will allow me to go any further. The only solution is to force my iMac off and restart by holding the back power button for ~10 seconds and a click back on.

This has been an issue for years, and I believe it has been an issue when I had 12GB, 16GB, and 32GB of RAM installed over the years. This has been an issue before and after I installed a second and third HDD and a SSD (in the optical drive bay). I have also removed the logic board to get to the SATA cable, meaning virtually all the connections have been reseated. The same behavior still exists no matter what I have done to upgrade this iMac. Again, this issue has existed across at least the last four versions of OS X.

Does anyone have any idea to why the backlight will light up, and the external display will wake and yet the rest of the computer (GPU) will not respond? Again, the iMac itself never sleeps, only the display and the hard drive sleep, the fans always run.

Which operating systems have you tried. Does the issue disappear with a specific version of the OS? Try to reproduce the issue on a clean install with no hardware attached to the computer.

Reset SMC as well. I have not heard of this issue.

It's April 2015 as I write this so have you resolved the issue?

If possible, return the computer to it's default out of the box config, a clean install and a fresh SW updates. Do not connect any external or internal hardware while testing. Once the machine stops exhibiting the reported issue, add one hardware component at a time until the issue reproduces itself.

Practice ESD precautions when going inside the machine, ground yourself!

I would not try to run either Mavericks or Yosemite on that box your losing most of the advantages of the newer OS, No Power Nap or AirPlay Mirroring functionality (which also requires an Apple TV 2nd Gen or later). With "Yosemite" only Mac-to-Mac AirDrop capability works no other advanced features are supported.

From Lion on there's been much chatter about the OS having poor sleep/wake from sleep behavior with some models. A google search will turn up plenty of others with your issues. The solutions vary.

My first step in dealing with an app that doesn't perform as expected is to delete the .plist (preference) file for that app often strange behavior of an app is due to a corrupted .plist file.

Thank you for the link above, that is one of the best "Solutions" I have seen! I really like the suggestion to remotely log in with the terminal. I am comfortable with Unix commands, and I have many Macs around to do it with. Unfortunately, this iMac is still my favorite and main Mac. It has 32 GB of RAM, a 4 TB Fusion Drive. Thankfully it is a Quad Core i7 also, even though if it were the Core 2 Duo model that was available at the same time, I could even run Yosemite on it too.

It is true that some advanced features are not available on this box, however there are many features that are available that I would miss. I have made phone calls with it linking to my iPhone 6 Plus, used Air Drop a few times, and have been using iCloud drive as my main document drive. If I reverted to Snow Leopard, I would lose all my iCloud functionality, I would no longer have 64-bit iPhoto, latest versions of iWork Apps, among many other things I have grown to use. I would have to break my Fusion drive too. Even though I have 32 GB of RAM, I may still benefit from the improved memory management starting with Mavericks. I don't know how great the file cache was in Snow Leopard. However, I could install Snow Leopard on another partition and try running that for a while and see if the issue reappears. I feel that it is simply a hardware issue, though software surely can enhance or work around hardware issues. I will report back with Console messages when the issue reappears. Thank you!

OK, so I have a very similar problem, in that my Macbook Pro won't wake up the external screen properly. I can see & move the mouse pointer, but only the internal screen will work.

In addition, the external screen is my primary monitor, and if the Mac has locked the screen while I'm away, the login is invisible on the external monitor.

So: I use an app called MacID to lock and unlock the computer using my iPhone, and it also allows me to unlock the MBP with a tap pattern on the touchpad.

The second thing is that I've got the bottom right hand hot corner set to turn off the screen. So, after logging in, I move the mouse to the bottom right corner, which turns off both screens, then move it back to the centre of the screen, which causes BOTH screens to wake up correctly.

I was looking for a proper fix when I found your post, so maybe this might help you work around the problem.