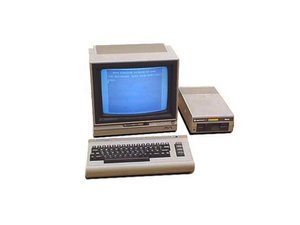 What differences are there between the C64 and C64 Personal Computer?

I have a "Commodore 64" with a 5 pin video connector, (serial # begins with P0) and a "Commodore 64 Personal Computer" with an 8 pin video connector (Serial # begins with CA). I have both a Commodore 1701 and a 1702 monitor, yet I cannot get the one marked "Personal Computer" to display properly. (The screen appears jumbled) The plain 64 displays on both units, although the color is not always there.

Do I have a bad "Personal Computer" or could there be other reasons why this unit will not display correctly?

IN addition, just what is the difference between these 2 different models? I don't seem to be able to find anything that relates to it.

Bill Machacek, check your boards. There is a Commodore 64c rev.A and rev.B. The 64c boards have the following texts: PCB ASSY NO. 250469 and PCB NO. 252311 REV.A (or B on newer boards). The difference between the two revisions is in the Gate Array chip: The one in rev.B includes COLOR RAM. The first C-64 models still had a five pin jack, like in the VIC-20. Shortly after that an eight pin jack was built in, providing the additional chrominance signal. Great information from here. Hope this helps, good luck.

Geek it Together, Inc.

I believe the one labeled “Commodore 64 Personal Computer” is the Commodore 64C, which was a redesign of the original C64 using the style of the C128. There were minor differences, but the intention was 100% compatibility with original software.

The (almost) white color complied with the color of the C128(D) and also the cabinet was similar to the C128 (apart from the missing numeric pad).

The C64E board was significantly higher integrated.

Through this the production costs could be reduced and so the C64C could be offered for a lower price than the original C64 "Breadbox".

Compare your serial numbers to this registry: https://c64preservation.com/registry