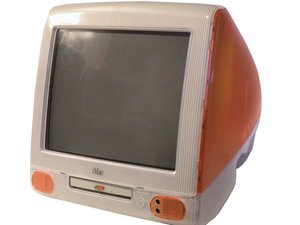 its not powering on

i need help it will not turn on

braadan waid, okay so here is what Apple suggested for this model:"

The iMac requires trickle voltage (+5 TRKL) in order to power on. If you are experiencing power problems in the iMac unit, you will want to test for trickle power to pinpoint the location of the problem and to determine whether or not the power supply/analog board is functioning normally. If you have trickle power in the system, the odds are your power/analog board is OK.

In general, you should test for power at the AC outlet first. Next, it is best to check the logic board. In this way, you will be able to immediately pinpoint which module is failing.

The following procedures will explain how to test for power at the AC outlet and at the logic board.

At the AC Outlet

If the unit will not power up from the keyboard, first, unplug the keyboard from the computer. Then, using a known-good power cord, power-on the system using the power button on the front of the computer. If the system powers on, you can assume the AC outlet is good and the problem is with the keyboard. If the system still won’t power on, try connecting to a different AC outlet. If the unit powers on this time, you most likely have a problem with the AC outlet. If you still have no power, you may need to reset the PMU chip (power manager) on the logic board (refer to “Resetting the Logic Board” in this chapter).

At the Logic Board

With the iMac placed with the CRT face down on a soft surface, remove the bottom housing and the EMI cover to access the logic board.

Testing J9 for +5 V Trickle Power on the Logic Board

You will need a volt meter to test for power on the logic board. Refer to the picture on the next page to locate the necessary test point referenced in the following procedure. 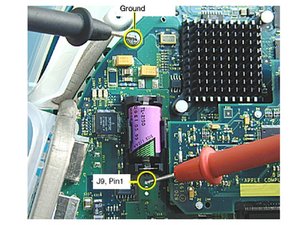 In a No Power situation, first check for +5 V trickle power at J9 (refer to “Testing J9 for +5 V Trickle Power on the Logic Board”), then check the DCO (Down Converter On) voltage on the logic board at capacitor C4 (see figure below).

The DCO voltage should be present as soon as the power cord is plugged into the computer. Ground the black probe on the volt meter to the logic board screw, as shown in the photograph below.

Touch the red probe to C4 (see the photograph below.) The DCO voltage should measure approximately -1.2 volts with the power cord plug plugged in. The voltage will jump to 21 volts after powering on the system. A reading of -1.2 volts up to +1 volt indicates the logic board is OK. Without a reading of -1.2 volts, verify the fuse at F901 is OK (refer to “Testing the Power/Analog Board Fuse” in this section). If the fuse is OK replace the power/analog/video board. 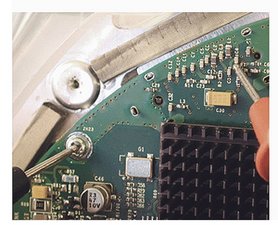 Testing J7 for Voltage on the Logic Board

Measure the following voltages at J7 on the logic board: 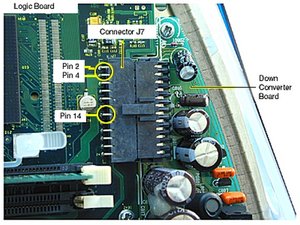 Testing the Power/Analog Board Fuse

First remove the bottom housing, front outer bezel, and the top rear housing to access the power/analog board. The fuse is located near the AC plug.

Warning: You must unplug the iMac to do a continuity test at the power supply board fuse.

You will need an ohm meter to do a continuity test on the power supply board fuse. Refer to the picture below to located the necessary test point referenced in the following procedure.

Unplug the computer to take this reading. Using an ohm meter, touch the red and black probes to the two metal points at location F901 and check for continuity (reading of “0”). If the ohm meter registers “0”, the fuse is good. If the meter registers “infinite”, 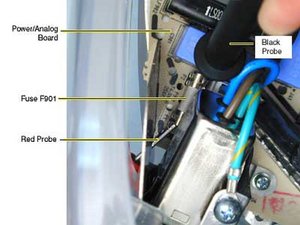 The PMU (Power Management Unit) is a microcontroller chip that controls all power functions for the computer. The PMU is a computer within a computer. It has memory, software, firmware, I/O, two crystals, and a CPU. Its function is to:

• Tell the computer to turn on, turn off, sleep, wake, idle, etc.

Important: Be very careful when handling the main logic board. Remove the battery when handling the logic board so the PMU is not affected. The PMU is very sensitive and touching the circuitry on the logic board can cause the PMU to crash. If the PMU crashes, the battery life goes from about five years to about two days if the PMU is not reset. Refer to the next topic, “Resetting the PMU on the Logic Board” for the procedure. Many system problems can be resolved by resetting the PMU chip. The PMU reset button is located on the right side of the board, refer to the logic board diagram below.

Resetting the PMU on the Logic Board

Resetting the PMU (Power Management Unit) on the logic board can resolve many system problems. Whenever you have a unit that fails to power up, you should follow this procedure before replacing any modules.

4. Run MacTest Pro and return the computer to the customer.

Hi, do you have a schematic for this model ??