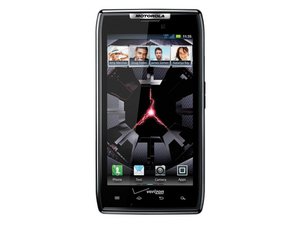 The Droid Razr is an Android-based, 4G LTE-capable smartphone designed by Motorola.

How do I fix my power button on my Razr?

My power button on my Razr is not working after getting it wet (I walked into a swimming pool). I don't suspect water damage because I opened the back cover and noticed the water damage indicators are in pristine condition. When it got wet it was in a rubber lined Otter Box, in my pocket, and it was only in the water for a few brief moments (less than 5 seconds). When I removed it from the case it appeared to have very little water on it. I let it dry out without using it at the pool for about thirty minutes then I did the whole bag of rice trick and silicon packs for about 4 hours. After that I started to panic when the screen wouldn't cut on. It would come on after plugging it into a charger and ALL of the other functions, buttons, sounds, and speakers work perfectly. I have tried resetting the phone (which apparently doesn't require the power button). I have the Awesome On/Off app which works, but I am unable to actually shut it down. What worries me the most is if my battery dies how will I turn it back on? I do not have insurance. Should I take it to a repair shop or are there any other tests that I can do to diagnose the problem.

The power button in this phone is soldered directly to the motherboard. It would be a very tiny and tricky repair job. I run a local repair shop in my town, but we dont usually do much soldering. Maybe a iPod battery and such. But something like that is what I call a micro soldering job. Would be doable by someone with the right equipment I suppose, but I can definitely see a risk. Especially without the right tools.