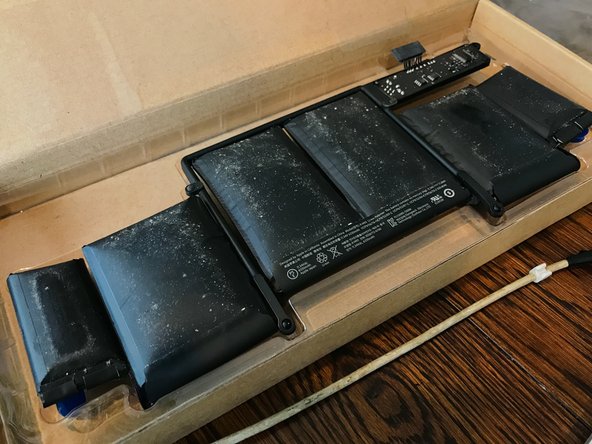 I don't know how much the only picture I took does it justice, by my mid-2014 13" Retina MacBook Pro battery was crazy swollen. This was the original battery and it had been through quite a variety of conditions during travels on 4 different continents over the years. In the end, it had swollen so much that it was deforming the machine such that I could no longer close the lid.

The repair went well, following the iFixit guide. When I first removed the screws to open it up, the bottom practically jumped off due to the swollen battery. Just following the guide steps went well, though I had trouble disconnecting the speaker cables (and was scared of damaging their sockets), so I left them in place and just left the speakers connected to the motherboard but folded out of the way. It was also a good opportunity to clean out the dust and debris that had managed to find its way inside my machine over the years.

I was super careful, because I didn't want the swollen battery to puncture, so things went a little slow, but pretty smoothly overall with getting it out.

Once I got the old battery out, putting the new one in and putting everything back into place felt pretty simple, and my machine feels almost like new, with the case no longer deformed and everything cleaned and fitting together nicely.

For anyone else doing this repair, if you are only replacing the battery, then you can skip the steps for disconnecting the I/O cable and bracket and the speakers from the motherboard. You can simply unscrew the speaker housings from the case and then carefully fold them out of the way. Those cables seamed pretty secure in their sockets, so if you are nervous about causing damage trying to disconnect them, rest assured that you don't actually need to in order to replace the battery.

Woooow that was the time sir incredible bulbbles …