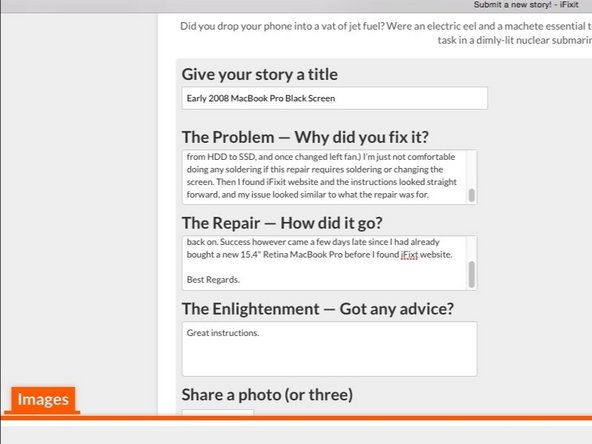 A few days ago the screen would not come on from over night computer sleep. I did the usual thing starting with repairing permissions (knowing that it most likely not related to this issue), zapping the PRAM, unplugging the power cord/removing the battery holding the power button on for a good 15 seconds, removing the RAM and starting the machine without RAM, put the RAM one module at a time and then both again, turning the screen brightness key on the keyboard all the way up and down many many times, and finally trying someone’s suggestion to remove Flash Player and re-install it again. After all of this the screen still won't light up.

Using a flash light I can see that things are showing on the screen. Hooked my TV using DVI to HDMI cable and everything on the TV was mirroring on the computer’s black screen. I can do anything I want with the computer using the TV to see what I am doing.

Obviously, the video card is still working, and the mother board is not dead. I planned to repair this problem only if it is something that can be easily fixed. I have no fear opening the case and replace any needed parts, ( I’ve done my own HD upgrade, then once again when I went from HDD to SSD, and once changed left fan.) I’m just not comfortable doing any soldering if this repair requires soldering or changing the screen. Then I found iFixit website and the instructions looked straight forward, and my issue looked similar to what the repair was for.

Got the LED Driver Board. Opened the machine, took the screen apart following iFixit instructions to the letter, replaced the LDB, put the screen and machine back together, fired it up, BINGO! Screen came back on. Success however came a few days late since I had already bought a new 15.4" Retina MacBook Pro before I found iFixt website.

Photo is a screen shot after repair.