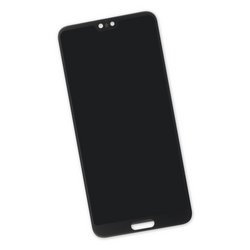 The flagship smartphone has a 6.1-inch OLED touchscreen with a resolution of 2240 x 1080 pixels. It's also distinguished by a small notch in the upper part of the display, its double camera bump, physical home button with fingerprint sensor, and a glass back cover.