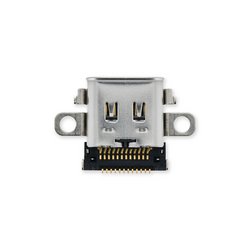 Replace a corroded or malfunctioning USB-C Port on a Nintendo Switch Console.

The Nintendo Switch was introduced in 2017 with the model number HAC-001. The 2019 revision, model number HAC-001(-01), has a new CPU and updated memory chips, which offer increased efficiency resulting in longer battery life. These changes increased battery life from 2.5-6.5 hours to 4.5-9 hours. Everything else inside the 2019 revision is almost exactly the same as the original Switch, from the Bluetooth and WiFi chips to the unfortunately-soldered-on USB-C port.