Update, Feb. 3, 2017: Looks like lots of folks are having trouble with broken camera lenses on the LG V20. So far, we haven’t been able to find any replacement lenses for this phone, which really rains on the LG V20’s highly-repairable construction parade. If there’s no parts, then you really can’t repair this phone—no matter how easy it is to take apart. We’ll keep looking for spare lenses for the V20. If you manage to find one, tell us where in the comments—so other folks can fix their phones, too.

Update #2, Feb. 27, 2017: A reader, Ed, says that he found a replacement part for this issue. He provides instructions on how to get the part down in the comments. Thanks, Ed! You can scroll down and find Ed’s comment, or click this link to go directly to the comment.

LG made another phone that knocks it out of the park when it comes to repair. Earlier this year, the Korean electronics company impressed us with the LG G5—a unibody phone that still manages to have a user-replaceable battery and a modular design. In October, LG released another repairable phone: the V20, which could be your very accessible, non-exploding alternative to Samsung’s (discontinued) Galaxy Note7.

First, let’s get the normcore tech specs out of the way: The LG V20 has a 5.7″ display, a Snapdragon 820 processor, 4GB of RAM, 64 GB of storage, and is 7.6mm thick (just a shade thicker than the iPhone’s 7.1 mm). Here’s where the specs get more repaircore: The V20 also has an microSD slot for up to 2TB of expandable storage and comes with an easy-to-access, easy-to-replace 3200 mAh battery. That’s right. Replaceable.

Wired’s Brian Barrett called the V20 a phone for power users who “feel rightly abandoned by the move toward one monolithic, iPhone-inspired smartphone design upon which HTC and Google and Motorola and others have converged. The V20 wants you to know that you are not forgotten.”

Something else LG didn’t forget: repairability. We didn’t get a chance to tear down the V20, but our friend Zack Nelson from JerryRigEverything did. And he said the V20 “is probably one of the easiest phones I’ve repaired all year.”

As Zack’s video teardown shows, the pathway into the V20 is pretty straightforward. The aluminum back panel has its own eject button and pops right off, revealing the user-replaceable battery. After removing the battery and the two clipped-in plastic end caps, Zack removed 21 Phillips screws to free the midframe and get to the motherboard. (The screws themselves might be slightly different lengths, Zack told us—so be sure to put each screw back from the hole it came from.) Admittedly, 21 is probably more screws than strictly necessary—not to mention LG missed a great chance to call it the V20-Screws—but screws are still a lot easier to remove than layers of glue. 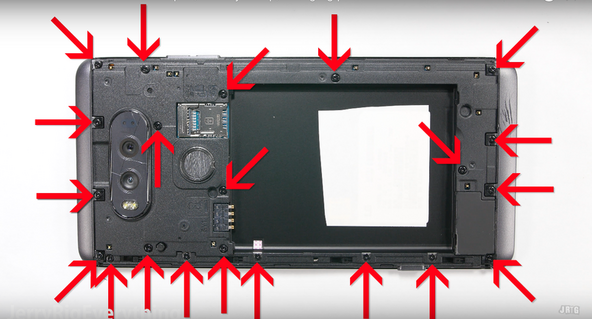 The V20 doesn’t require any heat to open it, so you don’t need a heat gun or a hair dryer “like you would [with] a Samsung. Those are much more difficult to repair,” Zack says.

With the midframe out, the motherboard comes out easily, the cameras are all modular, and the screen appears relatively easy to swap. Zack did single out one major repair demerit: the charging port is soldered to the motherboard. So, if you need to fix the charging port, you’re pretty much screwed unless you happen to be a secret microsolderer. (In which case, you should go public with that skill—the world needs more microsolderers.)

Still, there are way more V20 components that you can replace individually, compared to the ones you can’t.

“It’s refreshing to hold a phone with a removable battery. It’s beneficial on so many levels. The life of the phone is extended by years and the battery replacements are inexpensive and so easy that anyone can do it,” Zack told us. “Screen replacements are a little more technical. But only one tool is required: a screwdriver. And that makes it simple for the average person to fix on their own.”

SIM card holder in my LG v20 vs995 has a bent pin. The SIM card is not seen. How difficult is it to fix this problem. Either straightening the pin or replacing the holder.

I have dropped my v20 in water

I have replaced my battery.

My phone won't turn on.

Will someone help me figure out how to fix my phone?

Is there a reboot switch to turn back on?

Is there a primary part that needs replacing?

My name is Gilbert