I bought a replacement cable from iFixit and installed it. It lasted a few weeks and died also. I contacted iFixit and found out that somehow the battery being loose affects the integrity of the cable, yet from what I can tell, there is no way for the battery to come even close to the cable.

I spent several hours researching and browsing the web and forums to see what this might have to do with it. I found nothing!!

The most I could find was that Apple quietly updated the cable. But, that hasnt helped at all. I did read that their might be sharp edges that are cutting the insulation on the cable. I heard that the putting extra insulation around the cable might help.

Does anyone have any insight as to why this cable fails, why the battery might be involved, and what can be done to prevent this from getting worse?

Thanks all in Advance

Edit: The 2011 has been fixed and sold. it was actually that machine that introduced me to the world of failed SATA cables.

Edit 2: This is what my computer looks like inside. I do not see the metal tab that @danj is talking about. I would agree that the optical drive is probably more of an issue than the battery. I did insulate the edges around the step yesterday when I installed the warranty cable too. 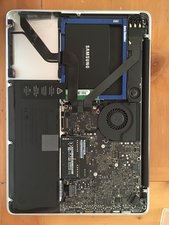 Apple will replace the cable on the 2012 13" for free. Best to go to an ASP for this rather than an Apple outlet as Apple pays them to do the repair. The battery has nothing to do with it. Look at the cable where it comes over the last step. The bottom hit it and damages it. When you take the 2012 in for the free replacement, ask to buy another one and put it in your 2011. Put some kind of pads on either side of the cable so the bottom will not hit it.