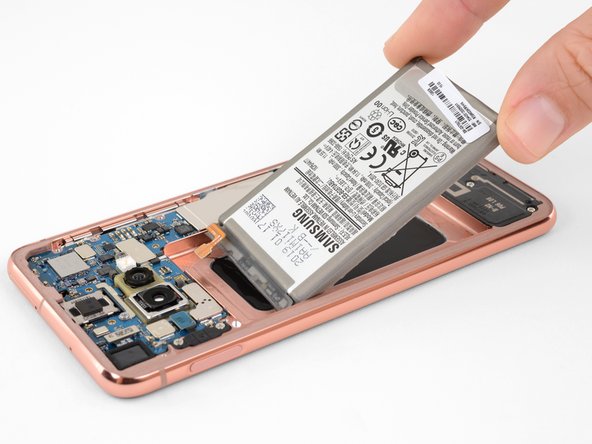 Use this guide to replace the battery in your Samsung Galaxy S10e.

The battery is held in place with strong adhesive. High concentration (over 90%) isopropyl alcohol will make the battery removal process much easier.

For your safety, discharge your battery below 25% before disassembling your phone. This reduces the risk of a dangerous thermal event if the battery is accidentally damaged during the repair.

If your battery is swollen, take appropriate precautions and do not heat your phone.

After completing this guide, calibrate your newly-installed battery.

Repair didn’t go as planned? Check out our Answers community for troubleshooting help.

After completing this guide, calibrate your newly-installed battery.

Repair didn’t go as planned? Check out our Answers community for troubleshooting help.

I was going to publish this guide but somebody did it already for me. Thanks!

By the way the color of that phone in the guide is hideous in my opinion.

When you say “moderate” difficulty, how what’s making it difficult or where is the risk coming from? With the right tools, patience, and even a small bit of experience replacing a screen in an admittedly easy Nokia Lumia phone, what could go wrong, and what would you recommend?

Hi Mark, the hardest part of this guide is dealing with all the adhesive without damaging anything. The back cover and the battery are both heavily glued down. To get the back cover off without cracking it, I’d recommend plenty of heat and very patient and gentle prying. If the prying gets really tough, try heating the back a little more. Removing the battery can be tough as well, but using adhesive remover helps a lot. Follow the steps in the guide and make sure you give the adhesive remover a few minutes to soak in. If prying gets difficult, add a little more adhesive remover and wait a couple minutes before continuing. Hope that helps!

We ran into the problem of the octa not seperating with the back glass. We were using the AoD JIG. What do u recommend as the next step in that instance?

If I buy the kit from ifixit, are the battery going to be relatively new? or the batteries have been seating in shelves since OEM days.