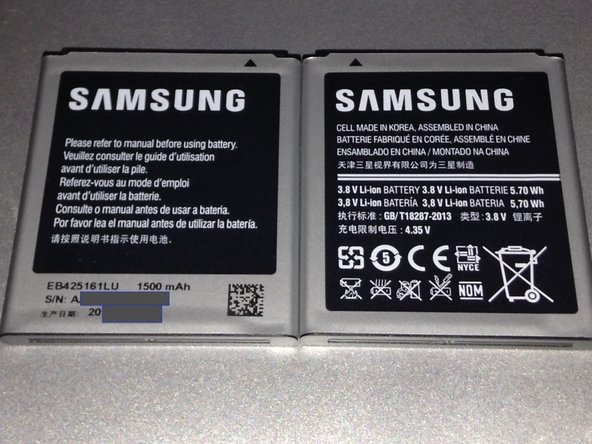 Wow, i dont see pages like this anywhere else, i have a xolo phone, in india, its battery dosent have any b+/- or p+/- terminals, it just has + - and the middle one, can i wire + and - in parellel to get the doubled MAH?

No no no thats is doubling the voltage and mah u just want to double mah. Because u double both and u now have a fried phone

In parellel, but only if two batteries are within very few mV of each other. They MUST be same mAH, or you will kill lower rated battery. First cut thin plastic or fireproof cardboard spacer, and place it between cells. Tape alined cells. Desolder top charging board from battery. Remove black plastic from top cell. Solder tabs + to +, then - to -. Nip lower black plastic, so tabs can fit under single charging board. Cover top battery tabs with tape or hot glue. Install pack same as you would single battery. Plug in phone charger. Fully charge battery pack, and enjoy. You now have a 1S2P 3.7 LiPo battery.

My battery hasn't got any b+ pin under the cover. Instead, it has p+ p- and b- pins.

What should i do? Should i connect p- to p- and p+ to p+? Or mine has a different way of doubling procedure?

Most LiPo cells have + and - markings below tabs. Follow instructions i posted, and you should be fine. Your phone will only read one BMS (charging board), so you don’t want two sending mixed information to your phone.

Please help. Thanks a lot.

how about you guys upload some photos of your batteries, if having trouble finding the right pads/pins. :-P

@Terrance, thank you; I’d forgotten about temperature sensing and identification.

I’ll have to do a dumpsys battery to see what info the OS is seeing from the combined battery.

please help me find the pins :) some foto i made http://lancercz.imgur.com/all/

It should work now :) sorry

Sorry, I can't tell exactly which pad is which. But you can always combine 2 batteries by output contacts, +to+, -to-. And remember use as few solder as possible to avoid ruin the contacts too much. These gold plated contacts are very easy to solder.

It looks OK but what will happen when you charge the batteries??! Is there any risk that the batteries will explode?

Also, is the charger able to charge this double battery?

2. Yes, a stock charger is able to charge double battery. It take ~2x time to charge them full.

Awesome! I have weekend project! Thanks for your great tutorial!

any feedback from people who have done this?

for 3-pin or 4-pin batteries, only tie + and - pins. (very likely the first and the last pin. Do NOT manipulate other pins, or temperature sensing or battery ID will be ruined.

I did this a while back, but the phone wont regognise the higher mah and battery meter runs down as normal, when it says the battery is flat i disconect and reconnect the battery and im back to full charge. any ideas how to fix this.

I have an s3 mini running on 20 18650 li ion batterys, lasts for ever as long as i restart the phone when it says its flat.

Hi! I was thinking of doing just that for my S2 (maybe turn it into a mobile 3G hotspot, with an USB-powered fan + CNC-milled heatsink around the camera/CPU area. So, even if I had 2+ Samsung 18650 batteries (the 2.9Ah ones), the phone would “die” / require a restart after it runs through 1.6Ah of the power???

i saw some zero lemon batteries for g3 on the internet. of course you can. i have a long weekend so maybe ill give this a shot. i have 4pins batteries tho,

Yo thanks for the info! it's very helpful, i'll try this later. One question tho. does this work on all types of 3 pinned batteries? I have 2 batteries for my phone and i HATE charging them one at a time .Any response will be appreciated!

wonderful, i have a question. if my phone stock battery is 2000mAh if i connect both battery as you showed. will my phone recognized the higher mah like 4000mAh on phone display? or it will say 2000mAh like before ?

if you tie P- to P-, It will still report 2Ah, and measured current consumption will be 1/2 of real value. If you tie B- to B-, it might report 4Ah, but not for sure.

Short answer: yes. Long answer: the 4Ah might be fake or mis-labled.

Awesome job done. I have a damaged Nexus 7 battery (the pbc is dead but the battery pack itself still retains charge) I'll try to bridge directly the battery ports and see it that works.

My battery has p- p+ b- , which one will i leave open? Thanks

must connect p+ to p+, and either one or both (p- to p-) and (b- to b-) works well enough. with tiny little bit technical difference.

Wonderful! Extended batteries are available but often pricey. For phones with removable batteries, this is a very good solution to double up multiple spare batteries and extend life/usefulness of your phone. Thanks!

I checked under the cover of the battery but i can’t locate the PCB. Please for advice.. can i connect only + and - pins which are visible on the picture ?

I can’t locate the PCB under the cover of my cell battery. Can i connect only the + and - which are visible on the picture and still get the double capacity ? Please for advice. txh

nice work , what if i want to combine the original samsung battery with a some LIPO cell that can be found inside laptop batteries

how it’s going to work ?

Would it be crazy to add an external battery to a phone (like iphone) routing two cables to the outside of the phone and soldering them to the outside battery on the correct poles? Thanks!

isn’t a powerbank a better choice?

@Terrance, I don’t think a power bank is a good idea here. All they can do is ‘charge’ the battery and in my experience they

barely keep the mAh from falling when the phone is in use, let alone putting more charge into the battery.

I think what pere carrizo wants is to ‘run’ the phone, possibly without even a battery present, bypassing the charging logic completely.

I’d like to see a variation on this idea: provide connectors for a 9v(?) battery, which you attach temporarily in parallel with the

extant, so you can change the battery without having to reboot the phone. What this’ll do to the Coulomb-counting, I don’t know.

can we tripple them

I’ve just successfully paralleled two Samsung Galaxy S5 batteries. It works but it’s too early to tell what the additional capacity will be in practice.

The voltage of the two batteries reported by my DVM is 4.8v (!)

I couldn’t relate the pin names to what I could see under the PCB cover, so I soldered the two + terminals

together with a solder blob. I also connected a wire between the two negatives (pin 3; there are four pins)

On this model, the NFC inductor is laminated to the battery to get it as close to the outside world as possible; I got this working

as well by removing the NFC inductor from the “inner” battery and wiring together one of the other pins, so as to connect it to the

outer battery. I’ll try and get some pictures but I don’t know to upload them in comments.

I am also going to try and put in an aftermarket wireless charging pad. I’ve had one before, but the thicker battery in this case will

change the geometry a bit.

I have a cell phone that isn’t charging - and no new batteries are available. I’m going to try to jumper through the case via a long wire that I can connect indirectly to an external charger. It’s 800ma. I am planning to use a second battery as a terminus and place that in the charger as needed or even long term as the charger has over-charge protection. I expect the original battery voltages to be lower - but I think the innate resistance of the original battery will prevent over-charging, and an equilibrium balance will just find itself without any rush of current, b/c al the potential max voltages are safe, all the potential max charging amperages are safe, and nothing evil can happen. The power genie is safely bottled up. I only expect the new battery to heat up based on current draw from phone as it does normally.

next day, i accidentally short-circuited my lenovo battery. does it reduce the battery current power??

By connecting in parallel we are practically increasing the current. wouldn't that be injurious to the PCB itself?

What if we only connect the +ve and -ve terminals?

Putting the cells in series does not increase the mah capacity it only increases the voltage!

This hack is very dangerous…accidentally short circuiting a li-ion battery can cause it to explode!

I think it is out of character for ifixit to support this kind of hacking!

Sir. Is it gonna work on realme 2 pro! I mean the batteries, if I bought two realme batteries? Thinking bout doin something weird

Can we do the same for iphone

Can wie try that with an Iphone too (Iphone SE 2016). I have two quite fresh batteries and I would like to combine them. After all I’ve seen it seems to be a totally different thing with an iphone.

Hi. I have samsung S10e and 2 original batteries, 3000 mAh, both 2 yo and capacity is 2300 mAh now. I buyed one used and one is in my phone. How to add or join togerher 2 same batteries to work normal? Keep one controller and which wires to solder?

Q: Can I mix batteries, one new and the other old?"

This has got to be one of the most irresponsible things I've seen in a long time. If one needs to be shown how to do this, it should not be attempted. This is why bomb disposal is not a 10min tutorial.