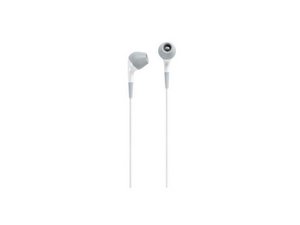 These white headphones are equipped with a remote and mic, and come with Apple's music players and iPhone. They are also sold separately. Released on September 9, 2008.

The heads, the remote too!

Prior to the development of Earpods, Apple debuted the In-Ear Headphones, a separate accessory seen as an upgrade to the traditional iPhone Stereo headset and the classic round earbuds that were shipped with iPod devices. However, unlike its counterparts, the In-Ear Headphones had silicone ear tips that were designed to provide a better audio experience for the user. According to a review by CNET, the headphones were shipped with six ear tips, a carrying case, and two additional caps. They are compatible with the iPod classic 120GB, 4th Generation iPod Nano, and the 2nd generation iPod touch.

Apple initially priced these headphones at $79 and were considered a high-end accessory at the time.

Due to their similarity to the traditional iPod headphones that would ship with the device, the In-Ear Headphones would suffer from common problems found in the former, such as audio loss in one ear due to the bending of the base of the connector and prone to water damage. Additionally, according to CNET, the all-white color will cause the device to show signs of wear and tear over time. Furthermore, the silicone tips will also discolor quicker than black colored ones.

A clear distinction from traditional Apple headphones is the use of silicone ear tips. This is a dead giveaway that the device is Apple’s In-Ear Headphones.