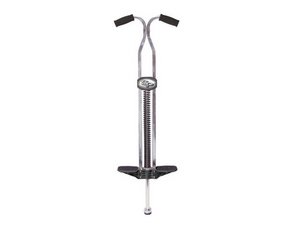 A pogo stick is a device used for jumping off the ground with the aid of a spring. It is used most commonly as a toy or as exercise equipment, but it could also be used as a mode of transportation. Who’s to stop you from pogo-sticking to the grocery store? (The only issue might be carrying the bags on the way back, so maybe grab a pogo stick for them, too.)

The ancestor of the pogo stick was a spring stilt patented by George H. Herrington in 1891. However, it wasn’t until March of 1920 that the modern pogo stick was born. It was invented by Max Pohlig and Ernst Gottschall. If you are exceptionally observant, you might have noticed something interesting about the inventors’ names. That’s right—the name “pogo” comes from the first two letters of each of the inventors’ last names.

While it has been a century since the pogo stick was invented, pogo stick innovation hasn’t stood still. Modern pogo stick renditions aim to make pogo sticks more powerful, ultimately allowing them to bounce higher and send their user into the sky. For instance, the air-powered V4 pogo stick from Vurtego ($390) offers an 8 feet jump potential. The company also makes the V4 Pro ($420), which can reach up to 10 feet off the ground.

Pogo sticks have a cylindrical body with handles at the top and a foot stand on the bottom. They are manufactured in a range of colors by numerous companies.