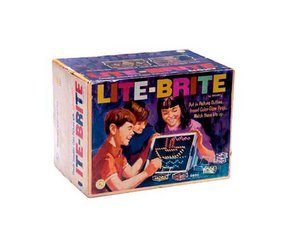 Lite-Brite is a toy, created by Hasbro in 1967, which allows the user to create glowing designs. It is a light box with small colored pegs that fit into a grid of holes and together create a lit piece of art.

The toy was invented by Joseph M Burck who worked for Marvin Glass and Associates, a toy and game design company. They licensed the Lite-Brite to Hasbro.

The basic design of the toy consists of a light box with a perforated panel on the front. Black opaque templates are placed on the panel and small multi-colored translucent plastic pegs are placed in the panel to create a picture. There are eight peg colors, red, orange, yellow, green, blue, violet, pink and white (clear plastic). Once the toy is turned on the picture is illuminated. Users could choose different pictures or characters to use with Lite-Brite such as My Little Pony or Transformers or do their own freeform pictures on a solid black piece of paper.

The idea is that the black paper blocks out the light of the single bulb except where the pegs allow the light to come through, making a glowing picture similar to a multi-color LED light display. The retro version used a standard light bulb and was plugged into the wall for power. The new version is battery powered and uses LED lights so it doesn’t generate heat like the original.