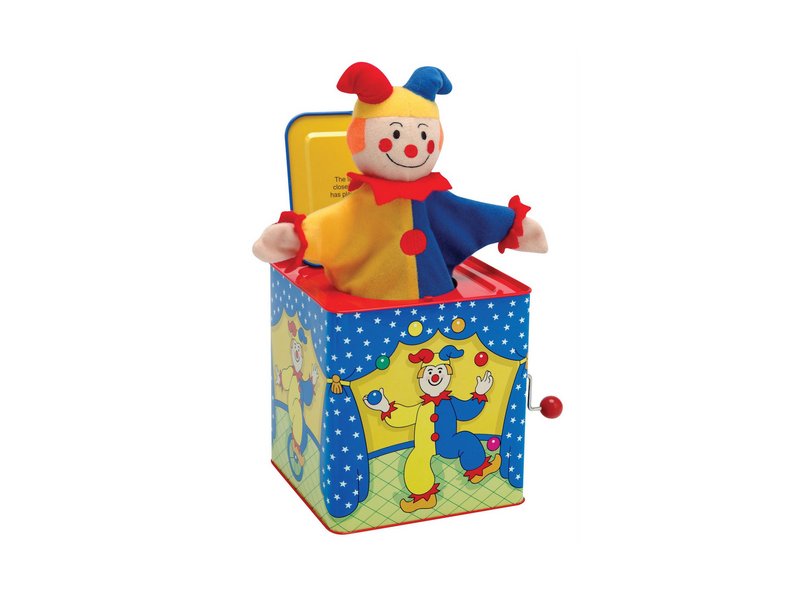 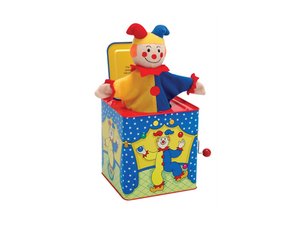 A jack-in-the-box is a children's toy that outwardly consists of a box with a crank. When the crank is turned, it plays a melody, often "Pop Goes the Weasel". At the end of the tune there is a "surprise", the lid pops open and a figure, usually a clown or jester, pops out of the box.

A jack-in-the-box is a children’s toy first created in the 1500s. At first glance, it is a box with a crank and when the crank is turned, the box plays music. After the crank is turned a sufficient amount of times, a clown or jester pops out of the box as a surprise.

The first jack-in-the-box was created by German clockmaker, Claus, in the 1500s as a gift for a local prince’s fifth birthday. It was a wooden box with metal edges and a handle that would pop out a cartoon devil or “Jack” after the handle was cranked several times. Once this toy was unveiled, other nobles began requesting their own “jack-in-the-boxes” for their children.

Originally jack-in-the-boxes were made out of wood, but with new and improved technology, they could be constructed with printed cardboard. Then, around the 1930s, the jack-in-the-box became a wind up toy made from tin. Nowadays, there are many variations of the jack-in-the-box and the clown character has evolved from to other characters such as Winnie the Pooh, the Cat in the Hat, the Three Little Pigs, and more. Some variations have the character pop out of the box at random times to increase the surprise factor. In 2005, the jack-in-the-box was honored with a place in the National Toy Hall of Fame, where all versions of the toy are displayed from the beginning of its history to recently manufactured ones.